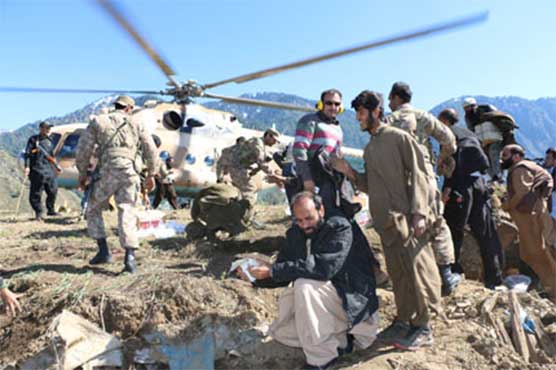 The funds will be distributed in quake affected districts of Khyber Pakhtunkhwa.

PESHAWAR (Web Desk) – In another move to provide relief to the quake-affected people in the province, Khyber Pakhtunkhwa government has released Rs7251 million funds for all the affected districts on Tuesday.

The federal and provincial governments have also announced a special compensation package for the quake victims.

According to provincial disaster management authority (PDMA), 232 people have lost their lives, 1502 sustained injuries and more than nine thousand houses were damaged when a powerful earthquake of magnitude 8.1 jolted Khyber Pakhtunkhwa having Epicenter in Hindukash region and focal depth of 193 Kilometer on 26th October, 2015. 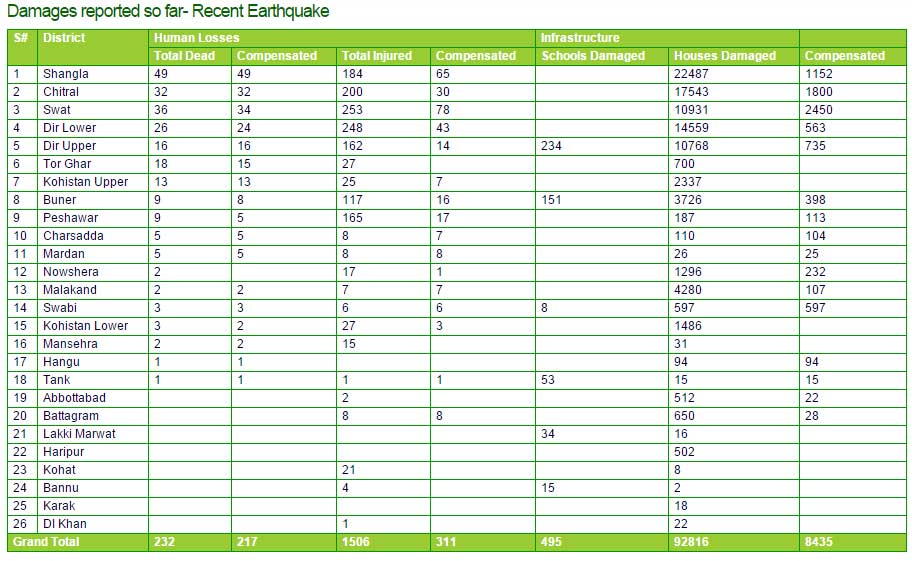 List of loss of lives and property damaged due to earthquake in KPK.

People desperately appealed to the government for quilts, blankets, sweaters and food rations as snowy and rainy conditions set in.

Pakistan Meteorological Department (PMD) reported today that a westerly wave is affecting upper and western parts of the country and likely to persist during next 2-3 days.

Rain with snowfall over the hills is expected at isolated places of upper Khyber Pakhtunkhwa areas including Malakand, Hazara, Mardan, Kohat, Peshawar divisions, upper FATA areas including Bajaur, Mohmand, Khyber and Kurram Agencies, Kashmir and Gilgit-Baltistan during the next 24 hours.

For many in Pakistan, last month’s quake brought back traumatic memories of a 7.6 magnitude quake that struck in October 2005, killing more than 75,000 people and displacing some 3.5 million.

The quake was centred near Jurm in northeast Afghanistan, 250 kilometres (160 miles) from the capital Kabul and at a depth of 213.5 kilometres, the US Geological Survey said.

Afghanistan is frequently hit by earthquakes, especially in the Hindu Kush mountain range, which lies near the junction of the Eurasian and Indian tectonic plates.