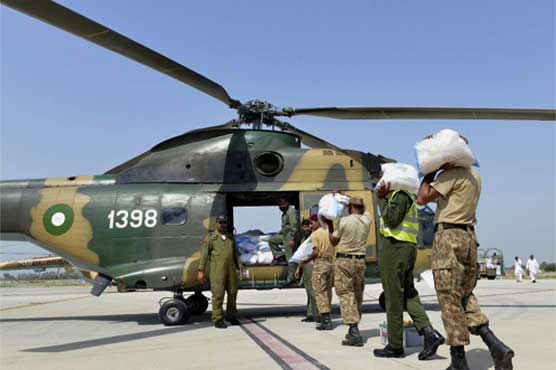 During the past 24 hours, army aviation helicopters have made 27 flights into the affected areas.

RAWALPINDI (Dunya News) – Pakistan Army’s relief operation in quake hit areas of Khyber Pakhtunkhwa (KPK) and Gilgit-Baltistan is underway in the aftermath of 8.1 magnitude earthquake that killed more than 200 people across the country..

During the past 24 hours, army aviation helicopters have made 27 flights into the affected areas.

ISPR states that 49 relief camps and distribution points have been established in the quake ripped areas through which 30 ton ration, 4000 camps, 3000 blankets, seven ton medicines and 48 packets of ready to eat meals have been distributed.

Besides this, in the past 36 hours 1200 people have been provided with medical aid whereas overall 2345 individuals have been treated in Army’s medical camps.

Furthermore, 49 filtration plants have also been installed for the provision of clean water to the affectees.

Reportedly, small aftershocks that continued to shake the region have not done any further damage, but schools in upper parts of the the country remained shut as a precautionary measure.

The government has insisted that it does not require international assistance to cope with the disaster.

The bulk of the casualties were recorded in Pakistan, where 228 people were killed, including 184 in Khyber Pakhtunkhwa province, and more than 1,600 injured, disaster management authorities said.

For many, Monday s quake brought back traumatic memories of a 7.6 magnitude quake that struck in October 2005, killing more than 75,000 people.