Nation is proud of our war heroes: General Raheel Sharif 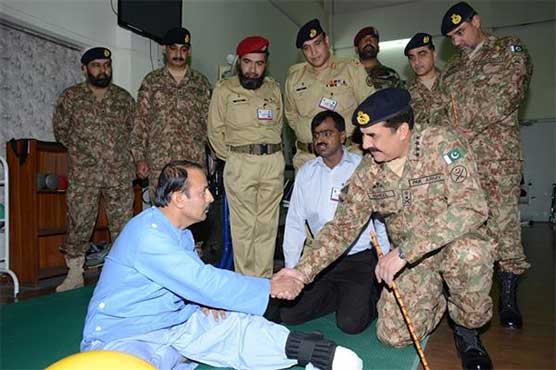 RAWALPINDI (Web Desk) - Army Chief General Raheel Sharif on Monday paid rich tributes to the sacrifices, valor and determination of the soldiers who were injured in the on-going war on terror.

“There cannot be a bigger sacrifice for the motherland than one’s life or limbs”, said General Raheel Sharif, Chief of Army Staff (COAS) during his visit to Armed Forces Institute of Rehabilitation Medicine (AFIRM), Rawalpindi.

He said our Nation is proud of our war heroes. COAS assured them that Nation and Army would do everything to bring comfort in their lives.

During his visit to AFIRM, the Army Chief was given a detailed briefing on transformation of rehabilitation work and modern facilities at the Institute with all sub specialties available under one roof.

He appreciated the standard of facilities and care extended by a team of dedicated doctors and paramedical staff of AFIRM and praised their effort.

General Raheel Sharif also inaugurated a special Gym and Resettlement / Vocational Training Department to improve their quality of life and integrate them in the society as useful citizens once again.