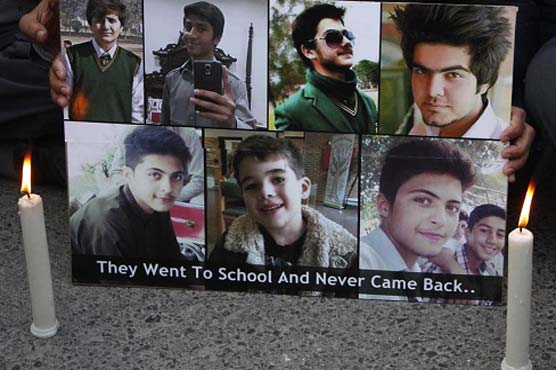 Educational institutes and government offices remained closed across the province.

PESHAWAR (Dunya News) – Khyber Pakhtunkhwa (KP) government had announced public holiday in the province today (Tuesday) to observe Chehlum of victims of Peshawar school attack. The main event in this regard was held at the Chief Minister (CM) House.

On the occasion, educational institutes and government offices remained closed across the province while recitation of Quran was held in every district of the province to pray for the departed souls.

The main event in this regard was held at the Chief Minister (CM) House in Peshawar where parents of martyred students and Pakistan Tehreek-e-Insaf (PTI) chief Imran Khan were also present.

Later, Imran Khan addressed parents of APS martyrs and announced free treatment of injured students at Shaukat Khanam Memorial Hospital (SKMH). He said that they would raise voice to have demnds of the martyrs  families met. Khan said that if need be the injured strudents would be sent abroad for further treatment.

IK addresses parents of APS martyrs, assures them of his full support, via @AkhunzadaISF pic.twitter.com/1XlCHmmFIK

The nation has been reeling from the December 16 terrorist attack in Peshawar — one of the worst Pakistan has experienced. More than 140 people, most them children, were killed in attack carried out by seven Tehreek-e-Taliban Pakistan (TTP) militants. All attackers were killed later.

The violence carried out by Taliban militants heaped pressure on authorities to end the stubborn insurgency that kills and maims thousands every year. The government has stepped up military operations in the tribal areas, reinstated the death penalty and allowed military courts to try civilians — all attempts to crack down on terrorism.