I won't change schedule due to illness: Tahirul Qadri 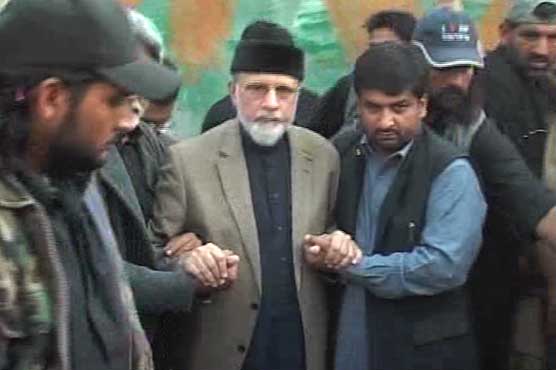 I won't change schedule due to illness: Tahirul Qadri

BHAKKAR (Dunya News) – Pakistan Awami Tehreek (PAT) chief Dr Tahirul Qadri on Monday has said that he is suffering from a heart problem for a long time and he is not well due due to a high blood pressure which is why doctors have advised him to take rest but he would not change his schedule because of his illness.

He expressed these views while talking to Dunya News in Bhakkar.

He said that he is not well but the demonstration of protest which is scheduled on November 25 would not be postponed.

He also said that they have rejected the joint investigation team (JIT) formed to probe the Model Town incident.

Dr Qadri paid a visit to the shrine of Pir Noor Sultan and later attended a marriage ceremony of three children of a PAT worker on Gondola Road. He presented Rs 1 lac to the newlyweds.

He also visited a candidate Malik Nazar Abbas of the PP-48 constituency and addressed the workers at his house.

While addressing the workers he said that the two workers who died in the Model Town incident belonged to Bhakkar and that he is staying there to pay his respect to them.

Dr Qadri urged the workers to make PAT candidate successful in the elections.