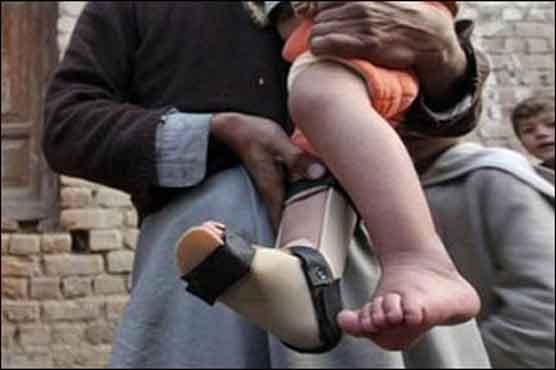 This month Pakistan broke a 14-year record for the highest number of polio cases in a year.

ISLAMABAD (Dunya News) – Polio virus has been detected in two minor girls and a boy in Federally Administered Tribal Area (FATA) on Saturday.
The affected children include 18-month-old girl and a 10-month-old boy in Khyber Agency while another 8-month-old girl has been affected by polio virus in South Waziristan.
Pakistan is one of only three countries in the world where polio remains endemic, but efforts to stamp it out have been taken a hit in recent years by attacks on immunization teams.
At least 64 people, including health workers and security personnel, have been killed in militant attacks on polio vaccination teams since December 2012.
The number of polio cases in Pakistan this year has reached 210, surpassing its record of 199 in 2000. Officials believe the figure is likely to rise by end of the year.
About 139 patients are from FATA, 43 KPK, 19 Sindh, 3 Punjab and 6 children belong to Balochistan.