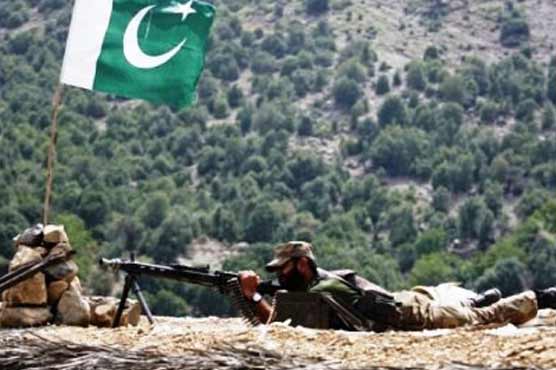 Security forces have besieged the entire area imposing a curfew.

KHYBER AGENCY (Dunya News) – According to the official sources, at least nine militants killed and ten injured in Aka Khel as a result of the freshly launched Operation Khyber 1 on Friday.

Security forces besieged the entire area and obstructed all incoming and outgoing routes by imposing a curfew.

500 families have been migrated to safe havens whereas an emergency control room has been set up in Khyber House, Peshawar.

According to the military sources, operation in Khyber Agency will continue until all militant elements have been swept off.

Several militant hideouts in Sipah, Malak Din Khel and Nala areas have been targeted during the operation.

Renewed air strikes come against the backdrop of a broader military offensive in the lawless North Waziristan region on the Afghan border, where the Pakistani army has been battling to contain the insurgency since June.

This week’s fighting concentrated around the remote Tirah valley in the region known as the Khyber agency, where TTP militants and their al Qaeda backers from across the mountainous area have been holed up since the start of the operation.

"The militants had established sanctuaries in Sepah and Akakhel and used to target security forces and local tribespeople," said one security official, speaking on condition of anonymity, in a reference to areas of the Khyber region.

Another security official said the dead belonged to Lashkar-e-Islam, an outlawed militant group active in the region.

The army maintains that it conducts air strikes only in response to militant attacks and never targets civilian areas.