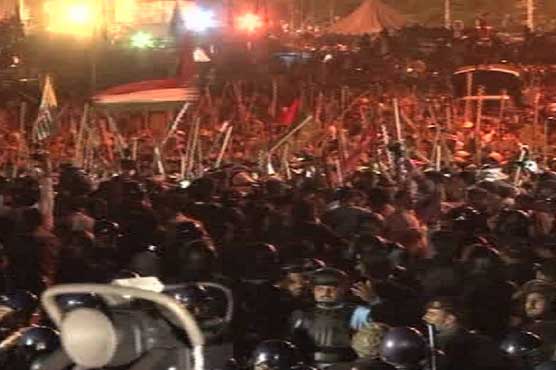 PTI, PAT chiefs directed marchers to move the sit-in towards the PM House.

Pakistan Awami Tehreek (PAT) chief Dr. Tahirul Qadri has said that the ‘peaceful’ sit-in by PAT will now be shifted now to PM House.
PAT chief said that the protesters will now demonstrate great patience for seventeen days and now, showing their exemplary peace, they will move forward and will stage the sit-in outside Prime Minister’s House.
While announcing the shift on the sit-in outside PM House, Dr. Tahirul Qadri prayed for the safety and success of the sit-in. He said that Pakistan Muslim League (Q) leader Chaudhry Shujaat Hussain and Sunni Ittehad Council (SIC) leader Hamid Raza Khan were only at the sit-in for the poor.
“I am peaceful. I stand for peace, patience, democracy, anti-terrorism and anti-violence”, said Tahirul Qadri.
Following the directions, participants of the sit-in started to march towards Prime Minister House.
Government sources had earlier claimed, according to Dunya News, that if the marchers will not be stopped with force.
Earlier, Interior Minister Chaudhry Nisar Ali Khan had visited Red Zone and had examined the security situation of the area near PM House and Parliament House.

Pakistan Tehreek-e-Insaf (PTI) chief Imran Khan on Saturday told the ‘Azadi March’ participants to ‘step ahead’ and move the sit-in protest towards the Prime Minister House, Dunya News reported.
Addressing the participants of the sit-in in Islamabad, Khan told the marchers to step ahead, adding that the male members of the sit-in will lead while the female members will follow.
He said he is a democratic person and that it is people’s right to protest outside the rulers’ residence. He cited his protests outside British Prime Minister’s house and the ones outside the White House as examples.
Directing his address towards PTI president Javed Hashmi, Khan said he tried to keep the team together just like a captain does. He assured Hashmi he would never do anything to harm democracy and democratic system.
Earlier, PTI chief said that they had requested the prime minister to step down from the premiership for as long as the investigation continues.
Imran Khan questioned "isn’t the democracy in jeopardy when the PM lies on the floor of the parliament?"
Any nation can accept any sort of a prime minister but a liar, he said.
The Sharif dynasty has vested their money abroad and urged the people of Pakistan to bring their money to the country, he added.
Khan insisted and invited all the people to come and join him for the sit-in for the sake of their ‘own future’.