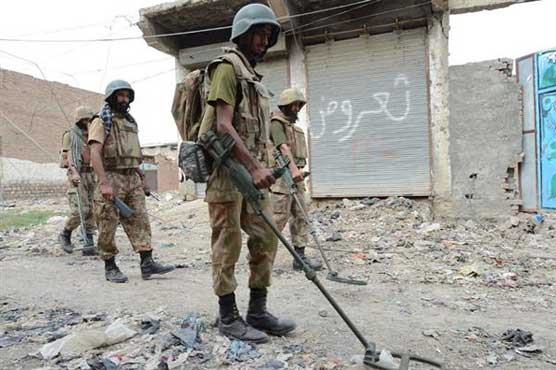 Forces have tightened the surrounding of the terrorists’ hideouts on various points.

MIRANSHAH (Dunya News) – The ground operation phase of Zarb-e-Azb continues successfully as the forces advances after crushing militant hideouts. More check posts have been established near Miranshah bazaar, Dunya News reported.
Pakistan Army is continuing to advance in the military operation against terrorists. Reportedly, the ground operation is achieving more than anticipated results.
Forces have tightened the surrounding of the terrorists’ hideouts on various points.
Pakistan Army continues to destroy the militant hideouts. The aerial surveillance of the affected areas is also being carried out.

It merits mentioning here that the armed forces successfully seized landmine manufacturing factories in the region on Wednesday. According to ISPR, during the operation, three more improvised explosive device manufacturing factories with large quantity of explosives, anti-tank mines, a suicide bomber training centre, a media facility and a rocket cache were recovered from cleared.
Six IEDs attached with four computers in a ready position were also recovered from a private hotel.
Earlier, Military helicopters shelled militant hideouts in the country’s restive northwest on Wednesday as part of a massive ongoing offensive against the Taliban and other extremists, killing 10 insurgents, officials said.
The helicopters pounded Islamist compounds in the Khar Warsak area, 12 kilometres (seven miles) north of Miranshah, the main town in the North Waziristan tribal region.
"The helicopters destroyed three militant compounds and killed 10 insurgents during the shelling," a local security official told AFP. A local intelligence official confirmed the attack and militant casualties.
Nearly 500,000 people have fled the offensive in North Waziristan, which is aimed at wiping out longstanding militant strongholds in the area, which borders Afghanistan.
Tens of thousands of families have left for the town of Bannu, close to North Waziristan, while hundreds more have moved further afield to the towns of Lakki Marwat, Karak and Dera Ismail Khan since the offensive began in mid-June.
Jets and artillery began hitting militant targets in North Waziristan on June 15, launching an operation to regain full control of the district after years of pressure from Washington and other powers.
The assault was finally launched after a dramatic attack on Karachi airport last month which killed dozens of people and marked the end of a faltering peace process with the Pakistani Taliban.
So far, 376 militants and 19 soldiers have been killed in the offensive, according to the military, though with the area off-limits to journalists the number and identity of the dead is impossible to verify.
Major General Asim Bajwa, the chief spokesman for the Pakistani military, said on Tuesday the ongoing offensive would target all militants, including the feared Haqqani network.
He also demanded Afghanistan do more to track down hardline cleric Maulana Fazlullah, who took over the Tehreek-e-Taliban Pakistan (TTP) leadership last year after previous chief Hakimullah Mehsud was killed by a US drone.
Fazlullah is believed to be in hiding across the border.
Relief for IDPs:
The government established three more registration centers at various points in Bannu on Thursday in order to facilitate the smooth registration of the IDPs arriving from the war zone. Reportedly, thousands are yet to receive government’s aid in terms of food and shelter.