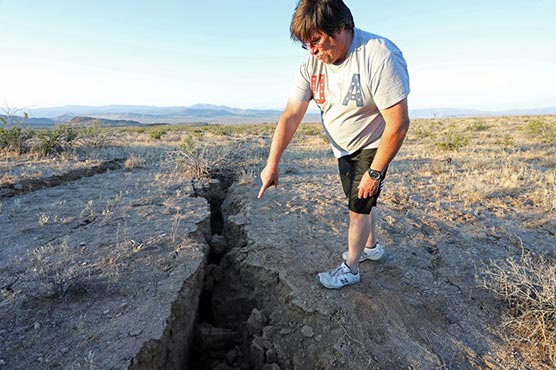 Officials now believe that the initial jolt was a foreshock.

(Web Desk) – Seismologists in California have recorded more than 3,000 earthquakes since July 4, when a 6.4 magnitude temblor rattled the southern part of the state.

Officials now believe that the initial jolt was a foreshock.

Seismologist Lucy Jones tweeted Saturday night that "larger quakes are looking more improbable" but that magnitude 4 earthquakes are "certain" in the next week, and some magnitude 5s are "likely".

"The sequence is decaying, and the decay rate is on the high side of average," she said. "So the probabilities of more aftershocks are dropping."

Seismologists also said they expect to ultimately record more than 30,000 earthquakes at a magnitude 1 or higher.

The quakes have centered around California’s Searles Valley, near the town of Ridgecrest, which has bore the brunt of the damage.

There have been no fatalities and only minor injuries, but authorities have recorded a number of fires and buildings that sustained major structural damage.

Photos from recent days have revealed a number of deep fissures throughout the Mojave Desert, as well as cracks in highways and lopsided houses.

This article was originally published by Business Insider.