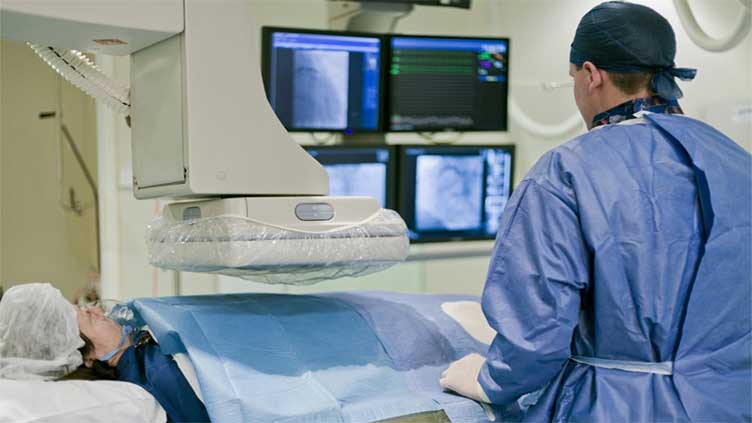 ISLAMABAD, (Online) - Atrial fibrillation (A-fib) is a medical condition that causes an irregular heartbeat. This occurs due to erratic electrical impulses in the heart’s upper chambers. Several surgeries are available to help correct the heartbeat.

Surgery for A-fib will try to restore the normal rhythm of the heart. A doctor will usually only recommend surgery if medications have not worked. Only rarely will a doctor recommend one of these surgeries as a first-line treatment.

A-fib can cause symptoms such as heart palpitations, shortness of breath, chest pain, and dizziness. That said, some people may not experience any symptoms at all.

The Centers for Disease Control and Prevention (CDC) estimate that around 2.7 to 6.1 million peopleTrusted Source in the United States may have A-fib, and according to a study in the journal Circulation, around 33.5 millionTrusted Source people worldwide may experience it.

There are several treatment options for A-fib, including lifestyle changes, medications, and other nonsurgical options. Although these treatments may help some people, they may not be effective for every person with the condition, and they are not a cure.

If these methods do not work, a doctor may consider surgery in the form of catheter ablation, maze surgery, or the insertion of a pacemaker following atrioventricular nodal ablation.

In this article, learn about the different surgical options available for A-fib.

A catheter ablation can help treat an irregular heartbeat.

Catheter ablation is an option for people whose medications are no longer effective and those for whom electrical cardioversion was not effective or possible.

Before the procedure, a health professional will carry out electrical mapping. This procedure reveals which areas of the heart are creating the abnormal rhythm.

The procedure involves inserting a thin, flexible tube called a catheter into the blood vessels and guiding it toward the heart. Catheter ablation aims to destroy the faulty tissues responsible for the incorrect signals and irregular heart rhythm.

The surgery achieves this using one of three methods:

For this reason, a surgeon may have to carry out ablation more than once. Occasionally, the scar tissue from one or more ablations can create other arrhythmias down the line, called “atypical” arrhythmias.

Catheter ablation is a minimally invasive surgical procedure, and recovery time is generally short. A person will still need to take anti-arrhythmic drugs until the procedure takes its full effect, however.

According to one 2019 reviewTrusted Source, the success rates for maintaining regular heart rhythms after catheter ablation is around 77.1% in people with paroxysmal, or intermittent, A-fib and around 64.3% in those with non-paroxysmal, or persistent, A-fib. The success of the procedure depends on how long the person has had A-fib, its severity, and some other anatomical factors.

Paroxysmal A-fib tends to develop and resolve without treatment within 7 days. It sometimes resolves within 24 hours. However, paroxysmal A-fib can be recurrent. Non-paroxysmal types can be more difficult to treat.

Although catheter ablation may improve a person’s quality of life and reduce symptoms, a 2019 clinical trialTrusted Source found that the procedure was no better at reducing the risk of complications than taking prescribed medications.

According to a 2018 analysis of people receiving catheter ablation in a German hospital, the overall risk of complications after the procedure was 11.7% to 13.8%, depending on the type of ablation and the site of the surgery.

In this study, people had a 3.8%–7.2% risk of experiencing significant complications. Other side effects may include mild pain, bleeding, and bruising.

However, a landmark clinical trial from 2018 found that people with A-fib and heart failure had a significantly lower risk of death and further hospitalization following catheter ablation than those who opted for other therapies.

Surgeons will perform full “maze” surgeries when people with A-fib have open-heart surgery, such as a heart bypass or valve replacement. The reason for its name is the pattern that results from the surgery.

During the procedure, the surgeon will make several cuts in a person’s heart to create scar tissue to interrupt the erratic electrical signals that rise to A-fib.

Around 90%Trusted Source of people will be free from A-fib following maze surgery, according to one 2011 study.

Mini-maze surgery is another option for those who are not candidates for open-heart surgery. This is a minimally invasive version of the full maze surgery.

The mini-maze procedure takes a few hours and involves the surgeon making three or four incisions on each side of the chest. After this, they will use surgical instruments — including an ablation device and a scope for viewing the chest wall — to create a block to the pulmonary veins and stop inconsistent electrical signals disrupting the heart.

The surgeon will also remove a small sac in the top left chamber of the heart. This reduces the risk of stroke and blood clots.

The current success rate for the mini-maze procedure after 1 year of follow-up is 79%, if a person takes anti-arrhythmic medications and 69% if they do not.

A pacemaker is a small device that a surgeon implants under the skin in the upper chest, near the collarbone. It has wires that tunnel into the heart.

Pacemakers do not treat A-fib, instead using electrical pulses to monitor and regulate heart rhythm. A person may require a pacemaker after certain types of ablation, or when a heart medication causes an excessively slow heartbeat.

In some instances, a surgeon may use catheter ablation to implant a pacemaker.

Before fitting the pacemaker, they will damage the tissue of the atrioventricular node. This is where the signals of the heart travel from the upper section of the heart to the lower part.

In a way, the surgeon is cutting the body’s own electrical cables and replacing them with a pacemaker, which a cardiologist can easily program to prevent fast heart rhythms. The pacemaker will then transmit regular heart rhythms.

According to the 2018 landmark clinical trial, ablation has the following benefits:

• It reduces the risk of hospitalization and death due to heart problems.

• It increases a person’s likelihood of being free from A-fib.

• It reduces the need for further cardioversion procedures.

Possible complicationsTrusted Source that can occur after an ablation procedure include:

• cardiac tamponade, which leads to a buildup of blood or fluid in the space around the heart

• pulmonary vein stenosis, wherein a blockage develops in the vessels that bring oxygenated blood to the heart

• paralysis of the nerve that controls the diaphragm, which can lead to breathing difficulties

• atrioesophageal fistula, a very rare but often fatalTrusted Source complication of injuring the esophagus and tissues around it with heat

The risks associated with maze surgery include stroke, organ failure, and death. Some people may also need a pacemaker after this procedure.

However, the potential of successful surgery may outweigh the risks. People should discuss all possible risks and benefits with their doctor.
Surgery is not the only way to manage A-fib. Making lifestyle changes can also help.

When is surgery necessary?

It is possible to treat A-fib using electrical cardioversion or surgery. Surgery is generally a last-line treatment, but health professionals have started to recommend it earlier in the course of A-fib treatment, especially to those with a reduced pumping function of the heart.

Researchers are now investigating whether or not early catheter ablation could change the trajectory of A-fib.

The success of cardioversion depends on the cause and duration of a person’s A-fib symptoms. For most people, cardiac rhythm returns to normal. However, cardioversion is not a guaranteed cure for A-fib, as it can reoccur.

If A-fib symptoms return, a doctor may suggest another cardioversion procedureTrusted Source. When a person combines cardioversion with medications, the heart rhythm can remain regular for up to a year or longer.

A doctor will often suggest making lifestyle changes as a first-line treatment. These may include:

People with A-fib can also take medications to prevent blood clots, control heart rate, and restore heart rhythm. If medications are not effective in restoring normal heart rates and rhythms, the next step is electrical cardioversion.

Electrical cardioversion involves receiving an electric shock to the outside of the chest wall to restore the normal rhythm of the heart. This will take place under general anesthetic.

A doctor may recommend surgery to treat A-fib when lifestyle changes, medication, and cardioversion are not effective.