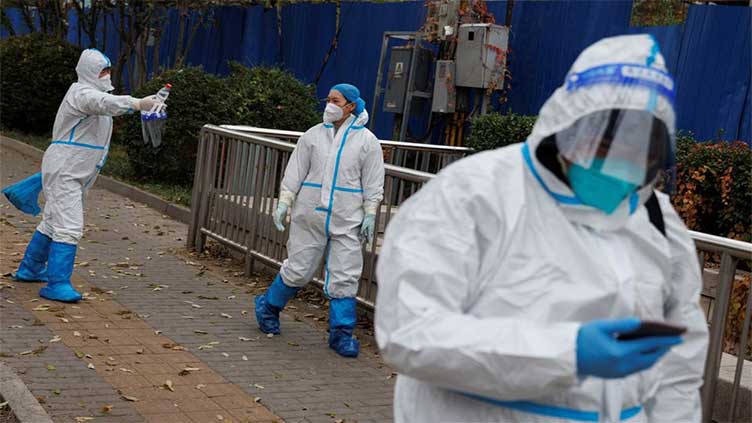 Under a series of measures unveiled last week, authorities have sought to be more targeted in applying COVID-19 curbs that are taking a heavy toll on the economy and fuelling public frustration and anger, sparking investor hopes this week for more significant easing.

However, China continues to emphasise its commitment to its zero-COVID policy, which Beijing argues saves lives, as outbreaks in cities across China lead to ongoing localised lockdowns.

Beijing’s Chaoyang district, home to embassies and large office buildings, urged residents to stay home this weekend after the city reported a record 466 infections for Thursday.

City officials warned of rising community spread and said prevention and control "is at a critical moment".

Some restaurants in the district said they had been told to halt dining-in, while some people were told by their residential compounds to take daily COVID tests. The intensified testing comes as some cities cut back on free community testing, which has been a drain on municipal finances.

On Friday, China reported 25,129 new local infections, up from 23,132 a day earlier and nearing the record of over 29,000 recorded in April during the height of Shanghai’s outbreak.

Wall Street bank Goldman Sachs, which recently trimmed its fourth quarter China growth forecast to 3% from 3.6% due to localised COVID curbs, expects continued disruptions before gradual reopening, which it predicts will start in April.

"In our baseline, before the April reopening, COVID control measures such as targeted lockdowns and testing will still be implemented in places where there is local COVID resurgence, posting protracted disruptions to services and consumption over the next few months," Goldman Sachs analysts wrote.

In another sign that China may be looking towards easing in 2023, President Xi Jinping said on Friday that China will consider hosting the third Belt & Road Forum next year. The previous events, in 2017 and 2019, drew leaders and officials from dozens of countries.

Experts warn that full reopening requires a massive vaccination booster effort, and would also need a change in messaging in a country where COVID remains widely feared despite overall case numbers being low by global standards.

On Friday, China’s Ministry of Culture and Tourism issued guidelines to travel agencies, entertainment and performance venues removing limits on numbers of people allowed at theatres and events such as concerts and music festivals in low-risk areas without outbreaks.

The Ministry of Culture and Tourism issued the revised guidelines to travel agencies, entertainment and performance venues, while local administrators were told to improve the accuracy of prevention and control measures and not to shut down entertainment venues down at will.

The specific measures, which are mostly in line with China’s latest rules, could nonetheless be a bright spot for services firms such as karaoke lounges and internet cafes that have been hammered by nearly three years of zero-COVID policy.

The southern metropolis of Guangzhou, a manufacturing and transport hub that is the epicentre of the current outbreak and has locked down a handful of districts, on Friday reported nearly 9,000 new cases for the previous day.

On Thursday, Guangzhou announced plans to build makeshift hospitals and quarantine sites with capacity for nearly 250,000 beds for COVID-19 infections.

The southwestern mega-city of Chongqing, another hotspot, reported 4,666 new infections.