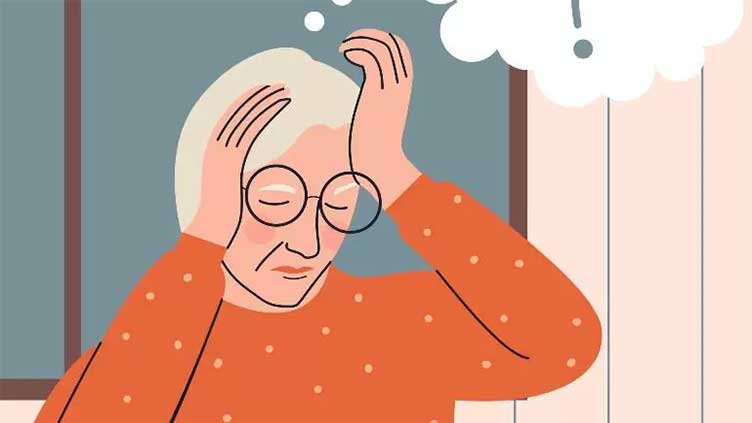 ISLAMABAD, (Online) - Dr. Hilary Guite: Let’s start with an overview of dementia and its causes.

Dr. Kamar Ameen-Ali: I always think that it’s good when we are discussing dementia to start off with a definition of what we mean by it. Often you might hear people use it interchangeably with things like Alzheimer’s disease, but they’re very distinct things.

Dementia, we kind of describe it as an umbrella term. It describes a set of symptoms, it’s a clinical syndrome — those symptoms are often associated with memory impairment. But for a diagnosis of dementia, you also have to have an impairment in one or more other cognitive domains as well — this might be personality, it might be visual-spatial skills, for example.

And as I mentioned, dementia as a clinical syndrome is distinct from something like Alzheimer’s disease, which is a type of brain disease that leads to dementia.

So only a small percentage of actual Alzheimer’s disease cases have got that genetic, known hereditary link.
The real-life impact

Dr. Guite: Thank you. So Paula, you’ve been looking after your mother with dementia alongside working. Can you tell us what you first noticed?

Paula Field: Yes, I am. I think my sister and I first noticed that there were some issues with her memory after my father had died. I think that she had started to develop some form of dementia before that, but [our parents] sort of helped each other out. And I think [our father] helped her through a lot of those daily things.

After he died, I think it became much more obvious [that something was wrong], but, you know, at that stage, we weren’t sure whether [her symptoms were] sort of a grief thing. But it gradually progressed. And it probably took us about 6 months or so after he died to realize that, you know, we probably did need to take her to the doctor, and to find out what was happening.

Dr. Maria Cohut: Paula, how did this affect you and your sister financially and during day to day life?

Paula: Well, I think in the early days, you could have a conversation [with our mother]. [My sister and I] were both working full-time, we’d go visit weekends, so we were there really regularly. In terms of financial impact, at that stage, there wasn’t very much, we just carried on as usual. We didn’t have any [additional] carers or anybody at that stage, we used to just go in as often as we could.

Then, once it got to the point when we had to take her to the doctors for her first memory test, and once the results came back, that’s when we had to start thinking about [arranging] more care. And that’s resulted in my sister having to take a day off a week from her work and spend two afternoons a week with my mom.

She has been doing that for nearly 4 years now. And we have other carers going in about twice a day now want to make sure that she gets up, and give her some lunch and the other one in the evenings, to give her some dinner. They do that about 4 days a week, and we pick up the rest.

Dr. Ameen-Ali: There are different types of scans that can be done, [such as] PET scans and MRI scans.

In terms of how well they can contribute to the diagnosis of brain diseases? Questionable, I think, because if we’re looking for brain changes that are associated with Alzheimer’s disease, for example, the question is how well can we see that pathology in the brain in life. Something like Alzheimer’s disease can actually only be diagnosed post mortem, when we can confirm that those pathological changes in the brain are actually there.

But something like a PET scan or a CT or an MRI scan, they can see whether there is that general atrophy in the brain, and that is something that we would expect to see in something like Alzheimer’s disease, particularly atrophy around the hippocampus, which is the part of the brain that is responsible for different memory processes.

So to a certain degree, these brain scans can help with the diagnosis of a certain brain disease that is leading to dementia, but we have to remember that it can only ever be confirmed post mortem.

Dr. Guite: You mentioned there atrophy, what does that mean?

Dr. Ameen-Ali: Atrophy is basically where the brain tissue degrades. If you were to see a brain that had atrophy, you’d see essentially shrinkage of certain areas of the brain.

Dr. Guite: My understanding is that the new PET scans can look at how the brain metabolizes nutrients, like sugar, and that they can show whether or not there are are some some proteins that get misfolded. Can you just explain what those proteins are — amyloid and tau — and how important they are?

These plaques then disrupt neuronal cell function, and then that leads to a lot of those cognitive issues that we talked about earlier.

There’s also tau, which is [another] protein in the brain. Again, it’s another characteristic pathological feature of Alzheimer’s disease. Normally, it’s a protein within axons of nerve cells, and it helps to form what we call microtubules that are responsible for transporting nutrients within the cells.

What we see in Alzheimer’s disease, is that it aggregates into these tangles, and it disrupts cell function in that way, and it affects how cells communicate with one another.

Changes in personality and behavior

Dr. Guite: Paula, after that initial phase and the the memory loss, what else did you start to notice [in your mother]?

Paula: Well, we noticed that she became quite isolated. She didn’t leave the house, she did start to leave her peas on the cooker. And I think, you know, that was the point where we started to go, “Eek, this is getting quite serious.”

She still has some sort of instinctual habit, so she’ll still switch off the switches at the end of the day. That’s something that she’s done forever. But pretty much everything else…

She knows there’s a fridge in her house, and she knows that there should be something on the shelves, and she will put stuff in the fridge. It could be a packet of crisps or it could be a cup. She has this sort of visual memory of the fridge, she sort of knows what it’s for, but she doesn’t quite know how to use it.

But that’s about it. She doesn’t feed herself. If she won’t drink water, she certainly couldn’t take medicines. She does not wash [on her own]. If we ask her to wash her face or something, she’s quite canny, she’ll go in the bathroom, close the door, won’t let you in, and then come out again.

She has no idea who myself and my sister are — she recognizes us [as familiar faces], but she doesn’t know who we are. She has no knowledge of people going in every day to help her.

She’s not very active, she pretty much sits on her chair everyday with the TV on and looks into space.