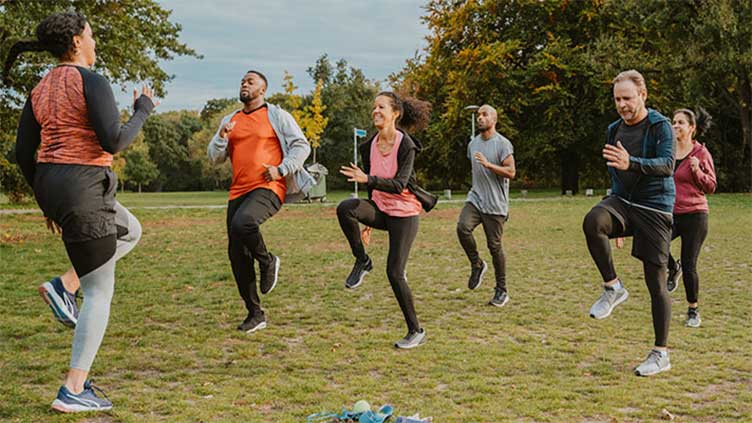 ISLAMABAD, (Online) - The link between brain insulin insensitivity and diabetes is well-established, but the exact nature of that connection is still being studied.

New research from researchers at the German Center for Diabetes Research, Tübingen University Hospital, and Helmholtz Munich in Munich, Germany, explores the effect of exercise on brain insulin sensitivity.

The study found that healthy levels of brain insulin sensitivity were restored in participants after an 8-week exercise program.

The findings were recently published in JCI Insight.

“This study reinforces the fact that physical activity is needed to restore the mind-body metabolic pathways in patients with obesity, prediabetes, diabetes, and metabolic disease in general,” Dr. Ana Maria Kausel, an endocrinologist and co-founder of Anzara Health, not involved in the study, told Medical News Today.

For the study, 21 healthy participants with overweight and obesity were enrolled in an 8-week supervised aerobic exercise program.

The cohort included 14 men and 7 women with a body mass index (BMI) ranging from 27.5 to 45.5 kg/m2. The participants led sedentary lifestyles and were deemed at risk for developing type 2 diabetes.

Three times a week, participants were led through 1-hour endurance training sessions. Each session included a combination of cycling and walking to bring individuals up to 80% of their peak oxygen intake, or VO2 max.

Using functional MRI after administering an insulin nasal spray to each individual, researchers assessed their brain insulin sensitivity at the start of the study and after 8 weeks.

The exercise program increased insulin action in the brain’s striatum and strengthened functional connections in the hippocampus to levels of people without overweight or obesity.

The researchers found that improved insulin sensitivity in the brain had positive effects on participants’ metabolism and reduced their sensations of hunger. Participants also decreased their amount of visceral fat, which further benefited their health.

“This was an interesting study — however, the sample size was very small (21 people), with twice as many women as men, which make the study underpowered, especially in the absence of a control group.”

Insulin is a hormone produced by the pancreas that helps the body regulate blood sugar levels.

In type 1 diabetes, for instance, the immune system attacks cells that produce insulin in the pancreas. In type 2 diabetes, the body becomes resistant to the insulin it produces.

“Brain insulin insensitivity can be correlated to diabetes and obesity, but more so has to do with brain metabolism and the efficiency therein,” Glatt explained.

“Studies have shown that insulin plays a role in neurotransmission, which means it can influence our mood, behavior, and cognition,” Dr. Ergin said. “One theory is that brain insulin insensitivity directly causes diabetes by preventing the body from properly processing glucose.”

“Another theory suggests that weight gain is the primary driver of diabetes, and that brain insulin insensitivity is indirectly connected to the disease. This second theory is supported by research showing that people who are overweight are more likely to develop diabetes, even if they don’t have any other risk factors. Ultimately, more research is needed to determine the exact relationship between brain insulin resistance and diabetes. However, it is clear that both conditions are strongly linked, and that managing one can help to prevent the other.”
– Dr. Ahmet Ergin, endocrinologist

Dr. Kausel described insulin resistance as a “vicious cycle,” noting that the process begins in the liver before it starts affecting different organs, such as the brain.

“When we have brain insulin resistance, the important connection between the brain and gut for hunger [or] satiety signals and metabolism gets impaired, making the problem even worse,” Dr. Kausel said.

Symptoms of brain insulin resistance to look out for include:

The signs of brain insulin resistance may go unnoticed since these symptoms are also shared by other chronic health conditions.

For people with diagnosed brain insulin resistance or those concerned they might have it based on their symptoms, exercise is linked to improved health in general.

Making a change away from a sedentary lifestyle is unlikely to cause harm — but it’s a good idea to speak with your doctor first.
“I always say to my patients to just start however they can — that is the first and hardest step,” Dr. Kausel said.

“Make sure they enjoy the activity so they can sustain it long-term, and every week add 5 minutes to it until they can do it for at least 45 mins. The activity doesn’t matter, the point is to move.”

Dr. Ergin added that exercising to restore insulin sensitivity may feel like a daunting task, which is why it’s important to start slow and set realistic goals.

“Every journey begins with a single step,” Dr. Ergin said. “A person might begin by walking for 20 minutes each day and gradually increasing the length and intensity of their workouts over time.”

To stay motivated and consistent with your workout routine, Dr. Ergin recommends creating a support system with friends or family members who are also working to improve their health.

“By following these simple tips, anyone can begin working toward a healthier lifestyle,” he said.