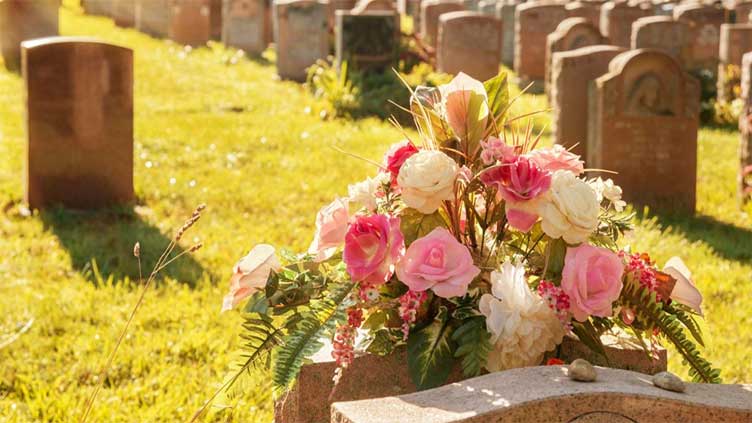 ISLAMABAD, (Online) - Death is something that we all, sooner or later, have to face. But how do we respond to it? Why are some of us more afraid than others? And what is it, exactly, that scares us about death? We offer an overview of theories related to death anxiety, and what you can do to address it.

Death is often a taboo subject, so when death anxiety comes into play, it is hard to know how to face it.

To a greater or lesser extent, it is likely that we are all scared of death – whether it be the thought of our own cessation or the fear that someone we love might pass away. The thought of death is not a pleasant one, and many of us avoid such morbid musings, naturally choosing to focus on what life has to offer, as well as on our own wishes and goals, instead.

Yet, as Benjamin Franklin once famously wrote, “In this world nothing can be said to be certain, except death and taxes,” so it is no surprise that death-related worries sometimes take us by storm.

Fear of death is sometimes referred to as “thanatophobia,” deriving from the Ancient Greek words “Thanatos,” the name of the god of death, and “phobos,” meaning “fear.”

Notably, thanatophobia – which is called “death anxiety” in a clinical context – is not listed as a disorder in its own right in the Diagnostic and Statistical Manual of Mental Disorders. Still, this rarely spoken-about anxiety has the potential to seriously affect people’s lifestyles and emotional health.

Thanatophobia was first tackled by Sigmund Freud, who did not consider it to be fear of death, as such. Freud thought that we cannot truly believe in death as a real occurrence, so any death-related fears must stem from unaddressed childhood trauma.

But it was the theory put forth a little later by an anthropologist called Ernst Becker that ended up informing most current understandings of death anxiety and its causes. Becker believed that death anxiety comes naturally to all people who find the thought of death and dying unacceptable.

That is why, he argued, everything everyone does – the goals we set, our passions and hobbies, and the activities we engage in – is, in essence, a coping strategy, and that these are things we focus on so we that need not worry about our eventual death.

Becker’s work gave rise to “terror management theoryTrusted Source” (TMT), which posits that humans must constantly deal with an internal conflict: the basic desire to live against the certainty of death. TMT emphasizes individuals’ self-consciousness and their drive to achieve personal goals, motivated by the awareness of mortality.

Also, according to TMT, self-esteem is key for the degree to which individuals experience death anxiety. People with high self-esteem are better at managing fear of death, while people with low self-esteem are more easily intimidated by death-related situations.

Some newer approachesTrusted Source suggest a “middle way” between TMT and another theory referred to as “separation theory,” which highlights the importance of early trauma, reinforced by an awareness of mortality later in life.

Another recent approach to understanding and explaining death anxiety is that of “post-traumatic growth theory” (PTG). According to PTG, going through a distressing event – such as the death of a loved one or receiving a worrying health diagnosis – can actually have a positive effect, causing individuals to appreciate the small things in life a lot more, or to become more goal-oriented.

Death anxiety as a disorder

Although it is likely that we will all be worried about death or a death-related situation at some time in our lives, death anxiety is only pathological when it reaches extreme levels, disrupting the normal lifestyle of an individual.

One account of death anxiety – as reported by a man’s worried wife – emphasizes how this kind of fear can become obsessive and get out of control.

“The fear is specifically of death (not pain or dying as such) and the emptiness of it (he’s not religious) and the fact that he will no longer be here. […] this is an irrational, emotional fear that he has trouble controlling. Recently it has got worse – he’s not sure why – but it has made him feel panicky and the thoughts have been straying into the daytime.”

Who is afraid of death?

Dr. Robert Kastenbaum has reviewed various psychology theories and studies related to the concept of death, outlining which populations are most likely to express a persistent fear of death. Drs. Patricia Furer and John Walker summarize the findings in an article published in the Journal of Cognitive Psychotherapy.

Women are more likely than men to experience death anxiety, and this tends to peak twice: once in their 20s and again in their 50s.

1. The majority of individuals are afraid of death. Most people tend to fear death, but they usually only exhibit low to moderate levels of anxiety.

2. Women tend to be more afraid of death than men. Additionally, a newer study has found that while death anxiety seems to surface in both women and men during their 20s, women also experience a second surge of thanatophobia when they reach their 50s.

3. Young people are just as likely to experience death anxiety as elderly people.

4. There appears to be some correlation between a person’s educational and socioeconomic status and reduced death anxiety.

5. No association has been found between religious engagement and reduced death anxiety.

Specialists argue that more often than not, death anxiety does not come on its own, and that it is instead accompanied by another type of mental health disorder (such as generalized anxiety disorder, panic disorder, post-traumatic stress disorderTrusted Source, depression, or obsessive-compulsive disorder).

Other studies show that people exhibiting health anxiety, or hypochondriasis, are also affected by death anxiety, as it naturally correlates with an excessive worry about health.

At present, specialists tend to recommend cognitive behavioral therapy (CBT) to people who face severe death anxiety. CBT is based on discussions and exposure, and it is often used to treat depression and many different kinds of anxiety and phobias, such as the fear of flying.

Drs. Furer and Walker advise a six-step “cognitive-behavioral intervention” in the case of individuals dealing with death anxiety.

Willing exposure to places and things associated with fear of death could help to counteract unhelpful mental habits.

Individuals seeking to reduce their death anxiety must be convinced not only to express their fear explicitly, but also to identify what exactly it is that scares them about death, and whether there are any situations or places – such as funerals or cemeteries – that they tend to avoid so as not to trigger their fear.

Drs. Furer and Walker suggest “exposure (both in vivo and imaginal) to feared themes related to death,” since facing elements associated with the individual’s particular form of anxiety is an important part of CBT.

This step targets the individual’s tendencies to obsessively check their own body for alarming changes, to speak to mentors or respected peers seeking emotional reassurance regarding their death-related worries, and to have an abnormal reliance on idealized health and emotional aids, ranging from supplements to superstitious behavior.

It is also important to review the individual’s “personal experiences with death,” such as having witnessed the death of a loved one or being faced with their own or someone else’s life-threatening illness.

“Helping [them] move toward more balanced views of these issues,” Drs. Furer and Walker explain, “may help them cope more calmly with the prospect of death.”

Next, the individual should clearly identify their “short-, medium-, and long-term goals,” to be able to focus on what they want to achieve in life and how best to enjoy their experiences, rather than obsess over their fear of death.

The therapist must also identify and address any consistent sources of stress for the person facing death anxiety, or any other “unhealthy aspects of their lifestyle” that are potentially aggravating the fear.

Finally, Drs. Furer and Walker acknowledge that, even after initial successes in diminishing death anxiety through CBT, many people experience a relapse. To prevent this from happening, they say that it is crucial to help each individual “develop coping strategies” for challenging situations that might re-trigger death anxiety, such as sudden illness or an emotional crisis.

Recently, professionals from the funeral industry, as well as even laypeople interested in tackling death anxiety-related issues, have set up resources to help other people deal with thanatophobia.

Mortician Caitlin Doughty, for instance, founded The Order of the Good Death, which is a collective of professionals from all walks of life who are dedicated to informing the public about death-related practices, and encouraging people to “stare down [their] death fears.”

A similar initiative that has picked up steam over recent years is the Death Cafe, a project that allows people from all over the world to organize meetings wherein they explore themes of death. The Death Cafe’s objective is “to increase awareness of death with a view to helping people make the most of their (finite) lives.”

In order to face death anxiety, however, one must first understand what it is, more specifically, that they fear about death. In one classical paper on thanatophobia also cited by Doughty, seven possible reasons for fear of death are indicated.

Identifying your specific death-related fears could help you to tackle them pragmatically.

1. I could no longer have any experiences.

2. I am uncertain as to what might happen to me if there is a life after death.

3. I am afraid of what might happen to my body after death.

4. I could no longer care for my dependents.

5. My death would cause grief to my relatives and friends.

6. All my plans and projects would come to an end.

Doughty suggests picking up to two reasons that we strongly identify with as our personal rationale for fearing death, and taking pragmatic steps to address them.

If we are afraid, for instance, that someone depending on us might be left in a financial crisis after our death, then we should take steps to ensure they are provided for in that situation.

In her view, being able to “unpick” the elements of our death anxiety and facing them separately can help us to regain our calm and be less bothered by our fears.

Face it or evade it?

Death and fear of death are often difficult topics to broach, especially when even healthcare professionals are unsure of how to talk about it or are also affected by it.

As a society, we are so keen to avoid thinking about the end of life that we have started obsessing over ways of artificially preserving life – such as cryonics, or “augmented eternity,” which is a project that aims to create “digital heirs” able to reason and respond in a similar way to their human “originals.”

There is no clear-cut way of dealing with the thought of our own or others’ mortality, and yet we must do it if we are to lead productive lives. What are your thoughts: is death best confronted with your eyes wide open?