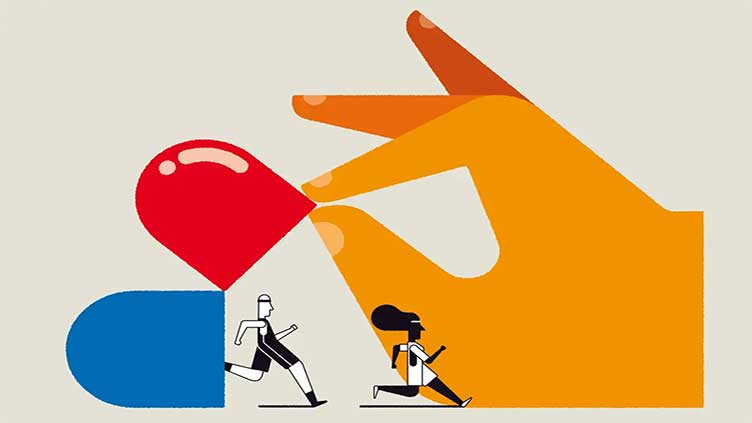 ISLAMABAD, (Online) - When we are physically active our bones and muscles work together to make them stronger. To maintain bone health, the American College of Sports Medicine recommends a combination of weight-bearing activities 3–5 times per week and resistance exercise 2–3 times a week.

Research has shown lifelongTrusted Source exercise to be beneficial for preserving bone health, and a reduction inTrusted Source physical exercise results in bone loss. The CDC Trusted Sourceadvocates regular physical activity to strengthen and maintain muscle and bone, researchTrusted Source has shown improving muscle strength can have a moderate effect in relieving joint pain for people with osteoarthritisTrusted Source.

Despite its benefits, modern-day living is associated with a lack of physical activity. According to the World Health OrganizationTrusted Source, physical inactivity is a serious but “insufficiently addressed public health problem” with up to 85% of the world’s population leading a sedentary lifestyle.

Inactivity is also associated with an increased risk of chronic disease. The British Heart Foundation attributes more than 5 million deaths worldwide to physical inactivity, which equates to one in nine deaths overall.

Chronic conditions, injury, and aging may mean it is more difficult to undertake physical activity, which can lead to muscle weakening (sarcopenia)Trusted Source and bone loss (osteoporosis).

New research undertaken at Tokyo Medical and Dental University (TMDU) has identified a new drug that can mimic exercise, and promote similar changes in muscle and bone.

The work, led by Professor Tomoki Nakashima, has been published in Bone Research.

Stronger muscles and bones with a pill

In the studyTrusted Source, the research team identified a new compound called Locamidazole (LAMZ) as a potential therapeutic drug that can cause similar effects to exercise.

To test the new compound, the researchers administered either 10mg/kg of LAMZ orally once daily, 6mg/kg LAMZ by injection twice daily, or a control solution for 14 days to male mice.

Administration of LAMZ orally and by injection showed changes in both muscle and bone. Researchers noted that the treated mice had wider muscle fibers and increased muscle strength when compared to the non-LAMZ-treated mice.

Endurance was studied using a treadmill device, the LAMZ-treated mice were less fatigued and traveled a longer distance than the non-treated mice.

In an interview with Medical News Today, Dr. Joseph Watso, assistant professor at Florida State University, who was not involved in the study, explained:

“It is thought-provoking that while the changes in distance traveled by the animals were small (around 2%), the increases in adjusted maximal muscle strength and muscle fiber width were quite substantial after 14 days of LAMZ administration.“

To understand the pathway further, the researchers orally administered LAMZ to mice whilst blocking PGC-1 alpha. They found no increase in muscle strength, indicating the effects of LAMZ on muscle and bone through PGC-1 alpha.

Exercise or a pill?

The study has shown that LAMZ can reinforce bone and muscle with no negative effects on surrounding tissues, and can function as a therapeutic drug by reinvigorating muscle and bone via PGC- 1a, mimicking physical exercise.

“The article provides convincing evidence in animals for an agent with a high potential to improve bone and muscle health. Like most agents evaluated in animals, the key next question is whether those findings will translate to humans. Of course, without any harmful side effects that may not have been observed in the animal studies.”

He cautioned that “it will be an arduous task to develop one elixir of health to replace the innumerable benefits of regular physical activity and exercise. That said, continued efforts are needed to reduce the incidence of, and burden associated with, preventable diseases.”

In certain cases, medication may be the safer option than exercise, but where possible, “exercise should be the first consideration for those who have the capability to be physically active,” said Dr. Watso.

Despite this, “it is certainly worthwhile to continue to examine population-specific risk factors and pathophysiology for potential treatment targets,” he added.