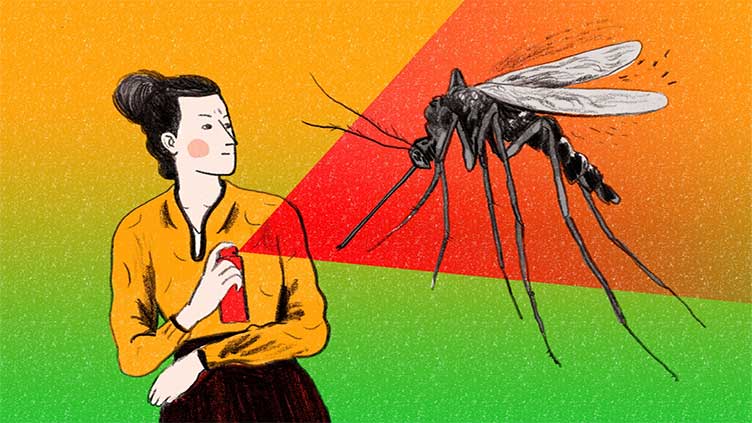 ISLAMABAD, (Online) - Relaxing outside on a summer evening — what could be nicer? Then, someone gets a mosquito bite, and the onslaught begins. As the mosquitoes feast on their chosen targets, others escape unscathed — but why? Medical News Today looks at what attracts mosquitoes, why they target certain people, and how to try and stop them from biting if you are one of the unlucky ones.

Why do some people always seem to fall victim to mosquito bites?

There are more than 3,500 typesTrusted Source of mosquitoes, only some of which bite people. And it is only female mosquitoes that bite — they need blood as a source of protein for their eggs.

To get it, they pierce the skin of their chosen host using their needle-like proboscis — resulting in a bite that may itch, swell, and even cause serious disease.

In many countries, a mosquito bite is more than just an annoyance. From the malaria parasite transmitted by the Anopheles species to the viruses that cause yellow fever and dengue, mosquitoes are responsible for the transmission of many of our greatest killers.

Even if you live somewhere where a bite carries no risk of disease, the high-pitched whine of a mosquito is an unwelcome noise.

The itching and swelling from a bite can last for several days. Scratching the itch may lead to infection and, for a very few people, an allergic reaction that could result in anaphylactic shock.

How often have you come home from an evening barbecue or camping trip covered in mosquito bites to find that others on the same outing have not been bitten at all? What is it that makes mosquitoes feast on some people while, apparently, ignoring others?

“The reasons for mosquitoes being attracted to humans have been discussed in a few studies. These studies have discussed body odor, body color, skin temperature and texture, microbes living on the skin, pregnancy status, carbon dioxide exhaled by humans, alcohol, and diet type. Overall, the studies suggest that pregnant women, people with high body temperature and sweat, diverse skin microbe presence, and those with darker skin could be more susceptible.”

But the answer is not straightforward — chemicals that attract some mosquito species have been shown to repel others. And people produce thousands of different chemicals, so working out which ones are affecting mosquitoes’ behavior is far from easy.

Drawn in by carbon dioxide

Humans, along with almost all other animals, give off carbon dioxide (CO2), heat, and moisture as a result of cellular respiration. And these are what initially draw the mosquitoes in.

One study suggests that three different disease-carrying mosquito species are activated and attracted by CO2. But everyone exhales CO2, so this cannot explain why mosquitoes bite some people more than others.

Another studyTrusted Source suggests that the higher the CO2 output the greater the attraction. “Individuals with a greater body mass do appear to be more attractive to mosquitoes and midges, which may relate to other characteristics such as increased surface area and CO2 output,” its authors write.

So could maintaining a healthy body mass help deter the biters? It remains unclear.

Several studies have identified lactic acid as another chemical that mosquitoes are drawn towards. As early as 1968, one study found that lactic acid attracted female yellow fever mosquitoes.

Another called it a signature human odorant for mosquitoes.

We produce lactic acid when we exercise, so the best advice is to wash with soap soon after exercising. Then dry off thoroughly before you head back out of doors.

Skin bacteria
We are covered in millions of bacteria — the skin microbiotaTrusted Source — which are vital for keeping our skin healthyTrusted Source. But does the composition of your skin microbiota determine whether we are likely to get bitten or not?

One studyTrusted Source investigated this with Anopheles gambiae, a malaria-carrying species. First they tested the skin microbiota of 48 men before using glass beads that had been rolled on the men’s feet as bait in mosquito traps.

They found that nine of the men were highly attractive to mosquitoes, seven were poorly attractive, with the rest somewhere in-between.

And was the microbiota having an effect? Apparently so. The greater the number of bacteria on the feet, the more attractive they were to the mosquitoes.

But, the study concluded, “[i]ndividuals with a higher microbial diversity […] are less attractive to mosquitoes and may therefore receive fewer bites.”

Our skin microbiota is influenced by our genetics, age, and immune system, something we cannot really do much about. But the products you useTrusted Source to clean and moisturise it can also have an effect, so perhaps avoid the antibacterial soaps if you want to try and keep the bugs from biting.

These useful microbes also affect the chemicals we give off. Human sweat, for example, is completely odorless until bacteria get to work on it.

And, according to the above study, some skin microbiota appears to give off compounds that make people less attractive to mosquitoes and thus function as an in-built defense system.

Unfortunately, we have not yet worked out how to manipulate the skin microbiota to harness these beneficial effects, but the study authors believe their findings may give some pointers.

“The discovery of the connection between skin microbial populations and attractiveness to mosquitoes may lead to the development of new mosquito attractants and personalized methods for protection against vectors of malaria and other infectious diseases,” they note.

In sebum, one study suggests that two saturated fatty aldehydesTrusted Source — decanal and undecanal — are odorants that attract mosquitos. Sebum composition and long-chain aldehyde levels vary between people. Could this be another reason for selective biting?

More than one studyTrusted Source has investigated whether blood group has any effect on how likely you are to get bitten. It is good news for those with blood group A — mosquitoes seem to find this less attractive — but not so good for blood group O.

People with this blood group were viewed as a tasty meal by almost twice as many mosquitoes as landed on those with group A.

There is, however, some compensation for those with blood group O. If the mosquito that bites you is carrying the malaria parasite, O group people are far less likelyTrusted Source to get severe malaria than people with other blood groups.

Is it untrue that some don’t get bitten?

Another theory is that everyone gets bitten, but some people just fail to notice the bites because they do not react to them.

If there is no itching or swelling, perhaps they just assume they have not been bitten.

Dr. Khubchandani agreed that there might be something to this theory: “Anyone can be bitten by a mosquito, but our reactions may differ. This in part is dependent on the type of mosquito bite/ species, our immune system and our personality and behavior — whether we brush it off, or take the bite seriously.”