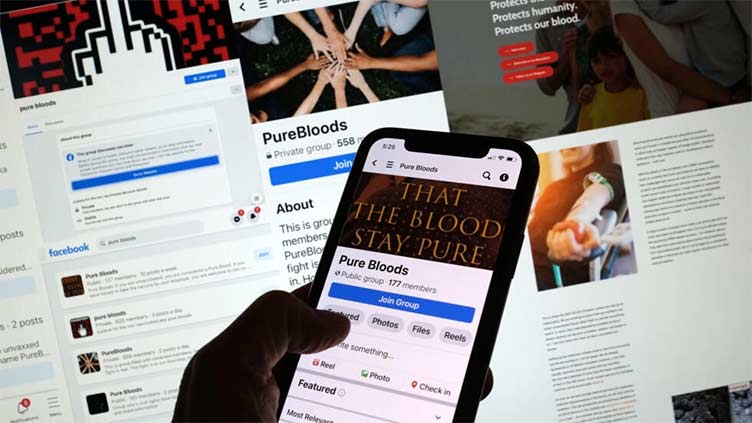 The movement spins anti-vaccine narratives focused on unfounded claims that receiving blood from people inoculated against the coronavirus "contaminates" the body.

Some have advocated for blood banks that draw from "pure" unvaccinated people, while medics in North America say they have fielded requests from people demanding transfusions from donors who have not received the jab.

Taking the hysteria to the next level was the recent high-profile case of a New Zealand couple, who sought to block life-saving heart surgery of their infant on the grounds that any blood transfused could have come from a vaccinated donor.

Their stance prompted a New Zealand court to take temporary custody of the baby to allow the procedure, but the case became a cause celebre among vaccine skeptics around the world.

"Cases like this spread like wildfire on both fringe and mainstream news sites and then social media, providing attention for anti-vaccine conspiracy theories," Katrine Wallace, an epidemiologist and assistant professor at the University of Illinois Chicago, told AFP.

"There is absolutely no science behind these conspiracies. If you give blood from a vaccinated donor to an unvaccinated person, the person receiving the transfusion does not become vaccinated."

The Zurich-based nonprofit offers to obtain "fresh or canned" unvaccinated blood for its patrons, according to Safe Blood’s website, which says it has a presence across western Europe, the United States, Canada, Australia, Asia and Africa.

"There are a large number of scientists and doctors who not only have great concerns about the Covid vaccines, but are convinced that they also enter the body via the blood through the back door, so to speak, and remain there," wrote Clinton Ohlers, the media director, quoting from the website.

"Blood donations from individuals who have received a Covid-19 vaccine are safe for transfusion," Jessa Merrill, from the American Red Cross, told AFP.

"Similar to other vaccines... the Covid-19 vaccine is designed to generate an immune response to help protect an individual from illness, but vaccine components themselves are not found within the bloodstream."

Safe Blood’s members are required to pay an initial joining fee of 50 euros ($54), followed by 20 euros each subsequent year, according to its website.

"The ‘safe blood’ movement is absolutely based 100 percent in anti-vaccine misinformation," said Wallace.

"As with all anti-vaccine misinformation, appealing to people’s fears is sadly profitable."

The demand to remain "pure" reaches beyond blood to social media posts soliciting sperm from unvaccinated men -- conspiracy theorists speculate online that the precious commodity will be the "next Bitcoin" -- as well as breast milk from unvaccinated mothers.

These requests appear to stem from belief in the debunked claims that Covid vaccines can cause infertility or alter the human DNA.

Demand for "unvaccinated" blood is unclear, but experts say it would be a challenge to procure it in countries with high vaccination rates.

The Food and Drug Administration in the United States, where more than 80 percent of the population has received at least one Covid jab, says it does not require blood collectors to test for vaccination status.

Hospitals are also not able to inform the status of donated blood to patients.

"Is the US blood supply tainted?" screamed a headline from Children’s Health Defense, a nonprofit founded by Robert Kennedy Jr, a known purveyor of vaccine misinformation.

An AFP reporter who infiltrated one of the closed "pure bloods" Facebook groups found posts vilifying doctors administering vaccines as "an arm of the state."

Other posts contained a cartoon image of a nurse holding a syringe and standing in a field full of skulls, and another of "victims" tumbling out of a vaccine bottle in crutches and wheelchairs.

Another post contained a video of a shirtless muscular man headbutting and smashing a car window in what was claimed to be a public outburst against vaccines.