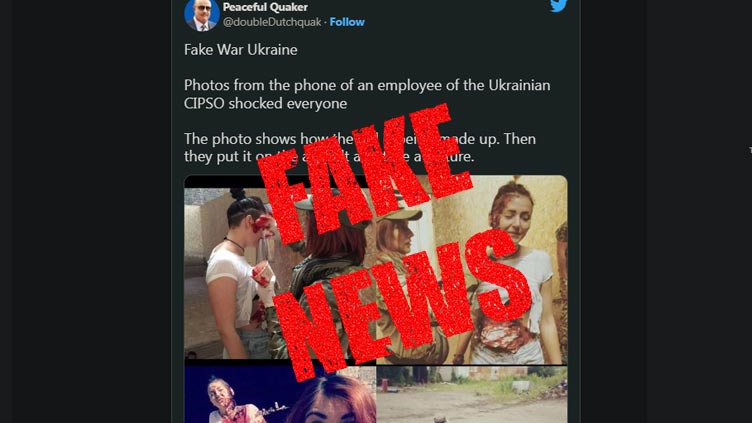 The photos are not evidence of Ukraine using actors or faking injuries in the war.

(Reuters) - English-language accounts are sharing a photo collage of a woman applying gory makeup to another woman, suggesting the images are evidence that Ukraine is faking wounds in its war with Russia. The photos were in fact taken during an emergency training exercise in 2016 before the current conflict.

The photos have been shared with suggestions that the woman wearing wound makeup is pretending to be a victim in Russia’s invasion of Ukraine (here).

However, the photos are not evidence of Ukraine using actors or faking injuries in the war. At least three of the image’s four photos appear to have been captured during combat casualty care training, a type of course for medics treating trauma injuries.

One the photos was posted to Instagram here on June 12, 2016, by a woman in Ukraine who describes herself as a combat medic veteran. The photo was shared along with a hashtag identifying the exercise as “tccc training” – tactical combat casualty care training. The individual has shared several similar photos from such exercises.

The same woman can be identified in three of the four photos in the collage.

A Twitter user appearing to be the same woman posted about the recent misleading use of the photos on Nov. 25 here .

The post reads (translated from Ukrainian): “Enemy propagandists stole my photos from training sessions in 2016 from Instagram and passed it off as a successful exposure of the special operation of the Ukrainian IPSO on production videos in Kherson.”

False. The photos are not proof of Ukraine using actors or faking injuries in the Russia-Ukraine war. At least three of the photos were taken during combat medic training.