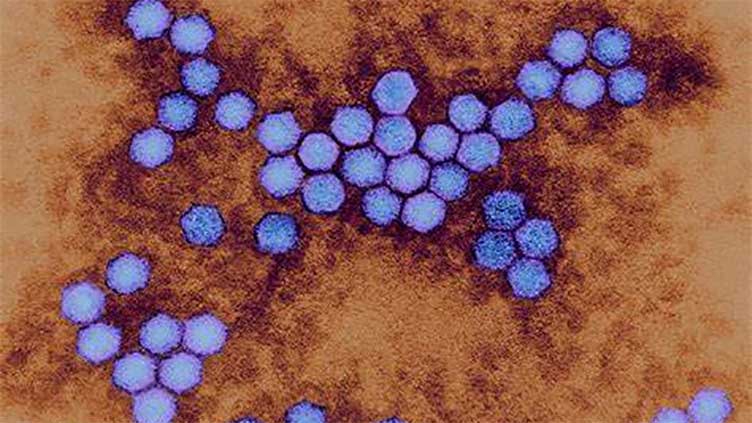 (Reuters) - Guillain-Barré syndrome, Bell’s palsy, acute flaccid myelitis and transverse myelitis are not polio “renamed”, despite claims posted online. The four “syndromes” are names for groupings of symptoms – some of which can resemble symptoms of polio and can be caused by an infection – but polio is a specific disease caused by the poliovirus, experts confirmed to Reuters Fact Check.

Reuters has previously refuted claims that Guillan-Barré syndrome (GBS) is polio renamed and that polio is a COVID-19 vaccine side effect (here), as well as recent claims that reported polio outbreaks are fabricated as a political “scare tactic” (here).

While GBS and similar syndromes are typically triggered by a bacterial or viral infection and can include symptoms – such as muscle weakness and nerve damage – that resemble the effects of polio, there are important differences between the syndromes that help doctors tell them apart. The syndromes differ from polio, which is a specific disease caused by infection with the poliovirus.

GBS, Bell’s palsy (BP), acute flaccid myelitis (AFM) and transverse myelitis (TM) “are not related to poliovirus, which has never been renamed”, Professor of Virology Ian Jones of the University of Reading told Reuters via email.

“They are distinct medical conditions that have distinct aetiologies (causes) and do not require infection by poliovirus,” Jones explained.

GBS symptoms usually occur within days or weeks of a viral or bacterial infection – frequently infections with Campylobacter bacteria or influenza viruses – and are believed to be caused by an autoimmune reaction, which leads to an attack on nerves or their protective covering.

GBS symptoms can include tingling, weakness, or even paralysis, but these usually resolve within about eight weeks, and 70% of patients make a full recovery (here and here). Though primarily seen following an acute infection, GBS can also be a rare side effect of vaccination (here).

BP is much more narrowly focused and is described as “sudden weakness or paralysis of muscles on one side of the face due to malfunction of the seventh cranial nerve (facial nerve)”, according to the Merck Manual (here). Mild cases typically resolve within a month, according to the Mayo Clinic, and the condition is often linked to viruses that tend to invade nerve tissue – such as Herpes simplex, Epstein Barr virus, and the Herpes zoster virus that causes Chickenpox and Shingles (here).

AFM is primarily seen in children and is a rare condition that “affects the spinal cord – particularly the grey matter – and over hours to days muscles weaken and normal limb reflexes disappear”, according to Great Ormond Street Hospital for Children (here). Symptoms are described as polio-like, and, like polio, the cause is often a virus that infects the gastrointestinal tract (an enterovirus). One virus in particular, known as enterovirus D68, has been most often seen in recent outbreaks, according to a review of AFM research (here).

TM is “inflammation that affects the spinal cord across its entire width and thus blocks transmission of nerve impulses travelling up or down the spinal cord”, according to the Merck Manual (here). This syndrome has been linked to infections – including with herpesviruses and enteroviruses – but also to autoimmune disorders that affect the nerves, such as multiple sclerosis, lupus and Sjogren’s syndrome, according to the Mayo Clinic (here).

Polio is the illness caused by the poliovirus (here), which primarily transmits from person to person via fecal contamination, and most often affects young children. The infection is usually “a mild gastric event”, Prof. Jones said, “but occasionally the virus finds its way to nervous tissue where it can also infect”.

“In these cases, the infection causes inflammation or death of nerve cells which then cannot function as they did before they were infected. The weakness or paralysis that is the hallmark of infection that reflects the area of the body served by the nerves that were infected.”

Like other infectious agents, poliovirus can also be a root cause of certain syndromes that manifest with muscle weakness and nerve damage, experts explained. But differences between each of the syndromes and the classical symptoms of polio are what help doctors identify the underlying source of a patient’s specific symptoms.

Professor of Infectious Diseases and Vaccine Epidemiology Nicholas Grassly of Imperial College London outlined some of the differences between the conditions to Reuters via email. AFP, for example, “can have many causes, of which GBS, an autoimmune disorder, is one, and poliovirus is another,” he said. However, “poliovirus does not cause GBS.”

Prof. Grassly added that if a patient presented with symptoms matching AFP, a physician could consider GBS, TM or poliovirus infection as all being possible underlying sources of the paralysis, but that’s not to say they are all one and the same.

Professor of Molecular Virology Nicola Stonehouse of the University of Leeds echoed this by saying poliovirus infection “can result in AFM” but is not likely to be a cause of TM, which “generally affects older children and adults, so is unlikely to be caused by polio, which commonly affects younger children”.

However, Stonehouse added: “Both of these (AFM and TM) are syndromes with a number of causes. Therefore, it isn’t impossible, but it is unlikely.” She also noted that she has “not heard of poliovirus causing GBS or BP”.

‘Wild’ poliovirus has been eradicated across most of the globe in a decades-long vaccination effort by a partnership of private charities and public health organizations including the WHO (here). Isolated outbreaks of wild poliovirus (WPV) do still occur in countries where the virus remains endemic, such as Pakistan and Afghanistan (here).

More recently in the news, however, are so-called vaccine-derived poliovirus infections. The widely used oral poliovirus vaccine is a live-attenuated (weakened) vaccine, meaning it contains active virus that generates a more protective response from the immune system than vaccines containing ‘killed’ virus. But on rare occasions, the live virus in the vaccine can produce an active polio infection after vaccination, which can spread to others who are not themselves protected by previous vaccination. The strain causing the outbreak becomes known as circulating vaccine-derived poliovirus (cVDPV) (here) and is easily distinguished from wild virus by its genetic resemblance to the version of the virus used in vaccines.

However, a small outbreak in a New York State community with low immunization rates (here) was reported in July 2022.

Testing of wastewater has also recently detected cVDPV in the UK, Israel and the U.S. (here and here). The presence of cVDPV in sewage indicates potential undiagnosed infections in the community (here and here).

False. Four medical syndromes with symptoms that can include muscle weakness and paralysis are not “polio renamed”, as claimed on social media. Poliovirus infection, while extremely rare, can lead to some of these syndromes, but the syndromes themselves also have other, more common causes and distinct symptoms. Recent detections of vaccine-derived poliovirus were not fabricated.