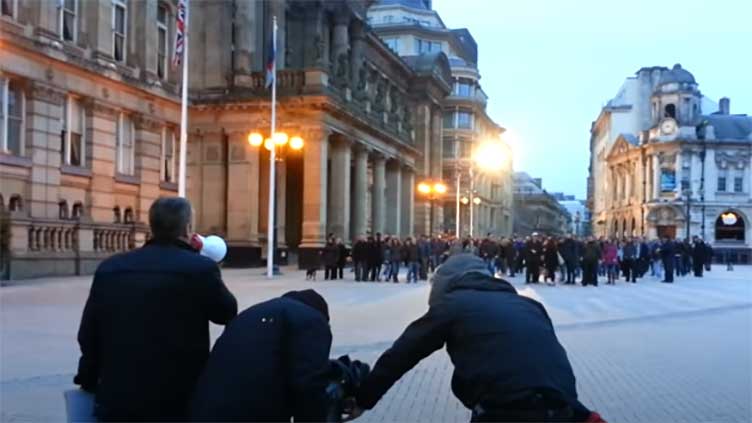 (Reuters) - A clip has resurfaced online of production footage with claims that the video is proof that the war in Ukraine has been staged. Instead, the footage was filmed years before the Russian invasion in 2022 and shows behind-the-scenes of a science fiction movie captured in Birmingham, UK in 2013.

The 28-second clip shows three individuals behind a camera with another holding a megaphone in a city square. Dozens of people can be seen standing quietly at the other side of the square. After several seconds, the individual calls into the megaphone: “Here we go, and action!” The throngs of people gathered across the square then start running and screaming toward the camera in apparent panic.

One user shared the clip via Twitter on Oct. 11 with a caption that reads: “Do you remember the March fake videos from Ukrainian producers?

American actor and director Sean Penn flew to Ukraine late January and spent several months there. A lot of those fake videos are of his production team” (here).

Other examples of the miscaptioned clips shared online can be found (here), (here) and (here).

The clip was not filmed in January 2022, weeks prior to the Russian invasion of Ukraine. A reverse image search reveals that the clip was uploaded to YouTube in 2013 (bit.ly/3EEjs0q) archived (archive.ph/wip/w9Trb).

The title of the YouTube video reads: “Invasion Planet Earth BTS run for your life Birmingham.”

Richard Wood, who uploaded the clip to YouTube in 2013 and was Third Assistant Director for the film ‘Invasion Planet Earth’ released in 2019 and directed by Simon Cox, confirmed to Reuters that he filmed the clip.

“These extras were invited by us to take part in a running and screaming scene. In the film it’s where the aliens come and start firing laser beams over a city center, people are vapourised as they are hit. Post production effects would be added later,” Wood told Reuters.

The scene of the clip currently circulating online matches a scene that features in the trailer of ‘Invasion Planet Earth’ (0.42s) (bit.ly/3MukI87).

The scene also wasn’t filmed in Ukraine, as claimed online, and instead was captured in Victoria Square, Birmingham. A geolocation is viewable (archive.ph/wip/94Roi).

Miscaptioned. The clip shows filming of a scene in the movie ‘Invasion Planet Earth’ that was captured in 2013 in Birmingham, UK.