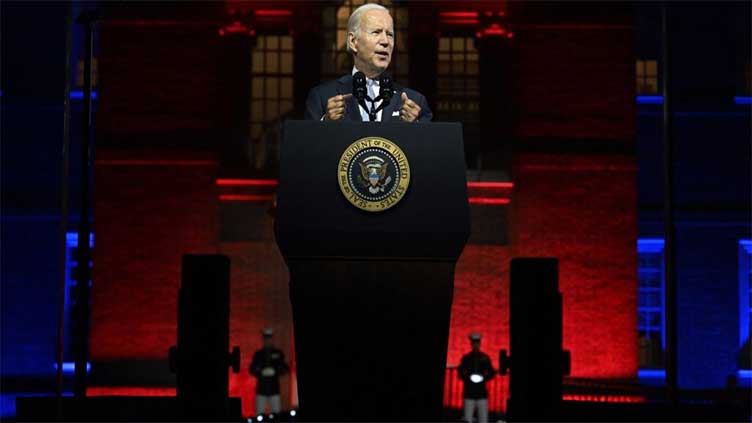 (Reuters) - Social media users have claimed that two members of the Marine Corps seen standing behind U.S. President Joe Biden when he made a speech in Philadelphia on Sept. 1 were digitally added to the footage, but this was not the case.

In his speech, delivered in front of Independence Hall at Independence National Historical Park in Philadelphia, Biden charged Republican allies of former U.S. President Donald Trump with undermining the country’s democracy and urged voters on Sept. 1 to reject extremism ahead of November’s midterm elections (here).

The social media users who alleged the marines were somehow superimposed digitally pointed to a TikTok clip that has attracted at least 218,800 views at the time of this article’s publication (here). The TikTok video shows a recording of a screen with footage from Fox News.

“So I want to point this out, see the two marines right there, next to Biden, well there’s a person videoing on their phone in the audience and there are no Marines. Watch,” a female voice is heard saying in the clip.

“He is always in front of a green screen. Always,” one user commented.

“Green screened the Marines into it because the real Marines refused to be there,” another wrote.

The allegation feeds into a repeatedly debunked narrative that Reuters has previously addressed that Biden is actually “body double” or that he uses CGI to fake appearances (here), (here), (here) (here) or, that the White House is a “movie set” (here), (here).

There is no evidence that the marines were digitally added to the footage.

The Fox News transmission recorded on the TikTok clip is available on YouTube (starting from around timestamp 6:46 (youtu.be/9onBP39bnt8?t=406).

The phone in the TikTok clip can be seen between timestamp 6:52 and 7:11. Although the phone’s screen is not entirely clear, the silhouettes suggest it recorded a wider angle from a distance, explaining why the marines can’t be distinguished on the phone’s screen.

The phone’s screen captures the segments of the building that were lit up in blue and red (a similar view can be seen in a Reuters photo) (here). Biden’s close-up visible in the Fox News’ footage only shows the red lights.

Reuters video shows another angle of the same moment (youtu.be/aB0qIZ8wa4c?t=2213), where the marines are also visible. The same phone recording footage in the Fox News broadcast can be seen around timestamp 36:58 – first held vertically and then horizontally.

False. Contrary to claims on social media, two members of the Marine Corps standing behind U.S. President Joe Biden during his speech in Philadelphia on Sept. 1 were not digitally superimposed on footage of the event. Reuters photos and video of the event show the two marines were present.