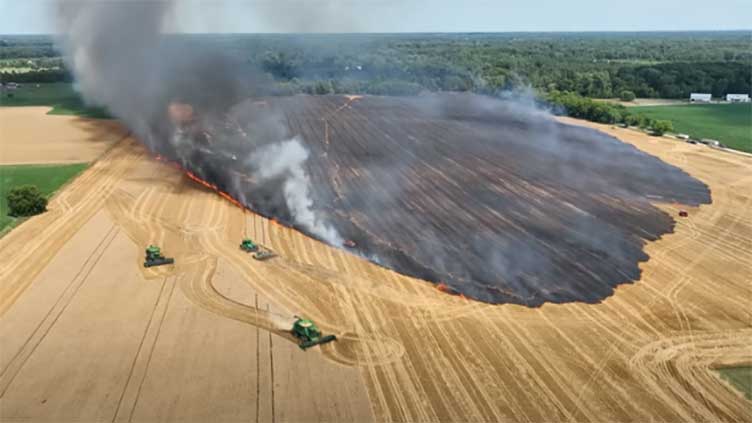 (Reuters) - Social media users have shared a video which they falsely claim shows farmers in Ukraine trying to harvest grain next to a fire caused by Russian shelling. However, while it is true that Ukrainian farmers have rushed to harvest grain near the frontline, the video was not captured in Ukraine and is not related to the war. It is actually a video of a field in Michigan, United States.

One Facebook user shared the video of an aerial view of combine harvesters moving on a burning field with a description that reads: “In #Ukraine, local farmers are attempting to harvest as much grain as they can, while the fire, started by shelling by the #Russian invaders, is threatening to consume the field in its entirety. Amazing bravery of ordinary Ukrainians! #russia #russiaisaterrorisstate #Ukraine #TrashRussianCash #TRC” ( here )

Another user posted the video alongside the caption: “While #Russian artists perform in #France and #Germany, #Ukrainian farmers harvest crops under the fire of Russian troops. #CancelRussianCulture #Russianculturekills” ( here )

Reuters traced the video back to a YouTube account controlled by a person in the U.S. state of Michigan who regularly uploads their own drone footage, such as this video (here), where they tested their new Mavic 3 Pro.

The user uploaded a super high-quality version of the fire video on July 19, titling it “Wheat Fire” (here ) and provided specific date and location details in the accompanying caption.

“July 18, 2022. A fire started while the farmers were harvesting this year’s wheat crop,” the caption said. “There were no injuries or loss of farm equipment. Crop loss is unknown. Location: Crystal Road and Spencer Rd, Crystal Township, Montcalm County, Michigan.”

The video was also shared in the “Montcalm and Surrounding Counties Fire, EMS, and Police Incidents” Facebook group (here ) and on Facebook (here )

Geolocation confirmed the video was indeed taken between Crystal Road and Spencer Rd. Satellite imagery matches the visuals in the video, including roads, fields, trees and buildings (bit.ly/3bZCgeB ) (youtu.be/4CwJTAobDIw?t=217 ).

Since Russia’s Feb. 24 invasion of Ukraine, the world’s fourth largest grains exporter, Kyiv has repeatedly accused Russia of attacking infrastructure and agriculture to provoke a global food crisis and pressure the West (here ).

Miscaptioned. The video was captured in Michigan, United States, not Ukraine.