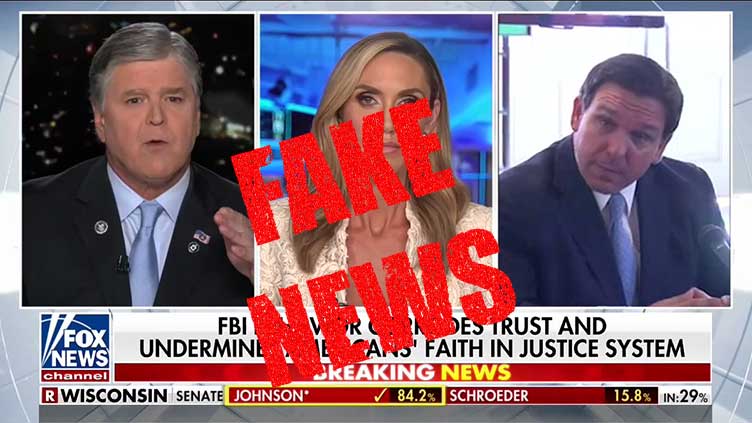 Examples can be seen (here ) and (here )

The text in the original tweet containing the video reads: “Ron DeSantis went on Hannity and things got SPICY”.

The video begins with Hannity saying: “When this raid happened, and it was a raid...” before appearing to be interrupted by DeSantis, who disputes the use of the word “raid”.

The alleged back-and-forth then continues without providing details on what the “raid” is and when it took place.

But this debate did not take place. Rather, the alleged segment is a product of splicing and combining separate videos from different topics on different dates and editing them together to make them appear as part of a single conversation.

The clip of Hannity can be traced back to an August 2022 Fox News segment about the FBI’s Aug. 8 raid at the Mar-a-Lago retreat of former U.S. President Donald Trump ( here ).

More information about the Mar-a-Lago raid can be found here.

It shows DeSantis discussing the raid of the home of a top data scientist – a separate event to the Mar-a-Lago raid. U.S. law enforcement searched the home of Rebekah Jones, who helped build Florida state’s online COVID dashboard, in December 2020, on suspicion of hacking a state Department of Health communications system.

Jones had previously alleged she was fired from her government job because she refused to manipulate data.
In response to the spliced Fox News video, Hannity (here ) said: “WARNING IF YOU SEE THIS ON TWITTER IT IS EDITED FAKE NEWS.

This never happened!! They spliced in comments the Governor made years ago. Twitter needs to step in and remove this immediately!!”

Altered. The video has been edited to include a 2020 video of Florida Governor Ron DeSantis talking about the Rebekah Jones raid.