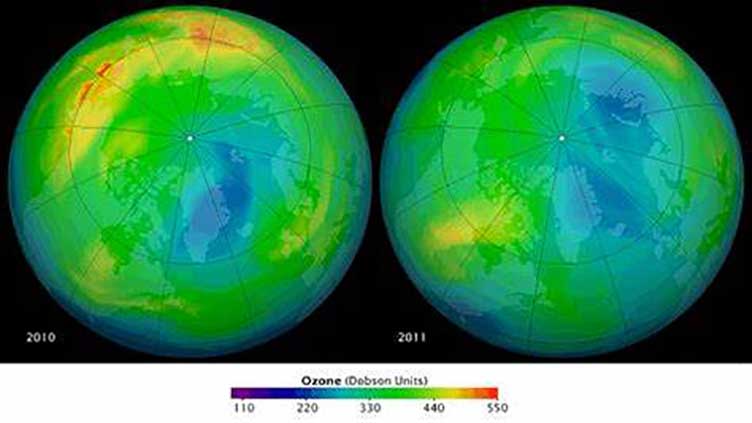 A post on Instagram liked more than 36,000 times (here) reads: “Remember when they spent years telling us to panic over the hole in the ozone layer and then suddenly just stopped talking about it and nobody ever mentioned the ozone layer again?” (here)

Other versions of these comments were shared hundreds of times on social media (shorturl.at/iLOX1), (here), (here), (here), often with additional comments arguing that this shows man-made climate change isn’t real.

However, all these comments are missing context. The reason why people talk less about the hole in the ozone layer is not because it was found to be unimportant, but because effective action has been taken.

Ozone is a natural molecule made up of three oxygen atoms that is mostly found high above the earth, where it acts as a shield against radiation. “Without ozone, the Sun’s intense UV radiation would sterilize the Earth’s surface,” one NASA publication reads. “With a weakening of this shield, more intense UV-B and UV-A radiation exposure at the surface would lead to quicker sunburns, skin cancer, and even reduced crop yields in plants,” NASA explains on its website (here).

The “hole” actually refers to a thinning of the ozone layer over Antarctica in the 1970s (here) that continued to deteriorate into the 1990s (here). Less than 220 Dobson Units (DU) of ozone (meaning a layer that would be 2.2 mm thick at ground level) is considered “severe ozone depletion” by the European Environment Agency (here) and is referred to as a hole in the ozone layer (here). In 1994, concentrations of ozone dropped as low as 73 DU.

The cause for the damage to the ozone layer was attributed by scientists to a number of manmade chemicals in the atmosphere, particularly chlorofluorocarbons (CFCs), which had been used in sprays, foams, air conditioning and refrigerators (here), here) (here). However, some industry players attempted to dismiss these concerns as nonsense (here).

The result of the protocol has been dramatic, dropping the consumption of ozone-depleting substances over the following decades down to a fraction of a percent of what they had been (here) (here).

“Without this treaty, ozone depletion would have increased tenfold by 2050 compared to current levels, and resulted in millions of additional cases of melanoma, other cancers and eye cataracts,” according to the UN Environmental Programme’s website. “It has been estimated, for example, that the Montreal Protocol is saving an estimated two million people each year by 2030 from skin cancer.” (here)

A NASA model predicted that, if the rates of ozone-depleting substances being emitted had continued, there would now be a second ozone hole over the Arctic and, by 2040, the ozone hole would be global. Rates of skin cancer would soar (here).

“The Montreal Protocol is considered to be one of the most successful environmental agreements of all time,” the UN Environment Programme’s website reads. “What the parties to the Protocol have managed to accomplish since 1987 is unprecedented, and it continues to provide an inspiring example of what international cooperation at its best can achieve” (here).

However, while prospects for the ozone layer are improving (here), many of the chemicals that had already been released are long-lived, some lasting in the atmosphere for about a century (here), and it’s predicted that the hole will not fully heal for decades (here), (here) and (here).

Missing context. The hole in the ozone was a genuine danger. The reason it is not talked about as much now is because action has been taken to address its causes.