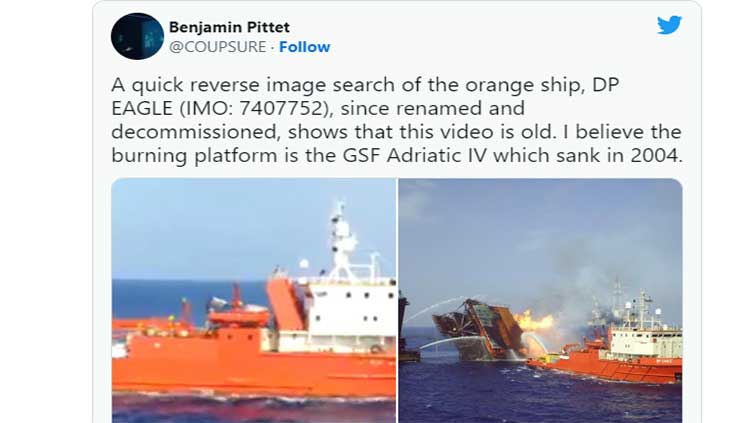 (Reuters) - A years-old video of an oil rig on fire has resurfaced online, with some users describing the footage as a recent event related to the Russia’s 2022 invasion of Ukraine.

The miscaptioned video circulated after the pro-Russian head of the Crimea region said on June 20 that Ukrainian forces had attacked drilling platforms in the Black Sea owned by a Crimean oil and gas company. Reuters was unable to immediately verify the reports. Ukraine’s military declined to comment.

This video, however, is not recent.

Reuters was not able to independently confirm the source of the footage, but it has been circulating online since at least December 10, 2008 ( here ), when it was posted on YouTube with the headline “Oil rig in Red Sea extinguishing.” It was posted again in 2014 ( here ).

An image viewable at website MarineTraffic – a top global provider of ship tracking and maritime intelligence – and dated 2004 appears to show the same event from a different angle ( here ) (see between timestamp 00:33 and 00:40, youtu.be/CEvbiWvjDrw?t=33), as pointed out by Benjamin Pittet, OSINT investigator at the Centre for Information Resilience, a nonprofit organization dedicated to counter disinformation, on Twitter ( here ).

Miscaptioned. This video is not related to the Ukraine war in 2022. It was posted online as early as 2008 and may stem from an incident in 2004.