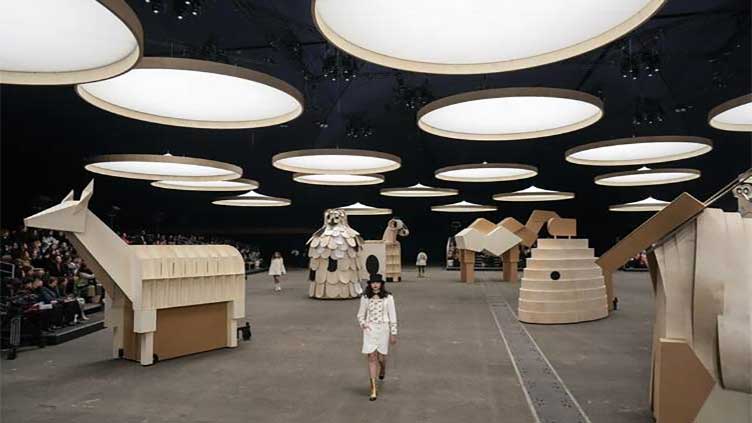 PARIS (Web Desk) — Art returned to a glittering Chanel couture universe Tuesday with monumental animal sculptures gathering in the center of the runway-in-the-round like a surreal zoo for its Paris Fashion Week show.

Yet as much as the animals — constructed in unpainted wood, paper and cardboard — appeared simplified, lifeless and monochrome, the Chanel collection itself contrasted dramatically, sparkling with color and sequins in an unusually vibrant display.

Here are some highlights:

Veilhan said he wanted to “evoke the relationship to animals which is constantly evolving in our societies.”
A VIP front row that included Marion Cotillard, Tilda Swinton, G-Dragon and Vanessa Paradis, watched on as a gargantuan camel, bull, fish, horse and lion resembling blown-up mobiles were wheeled onto this strange runway, beneath a ceiling installation of large geometric discs.

When a bird was pushed on set with a large beak and myriad scruffy wooden plumes, there were gasps. The chick seemed to give birth to a model in a top hat and a split white riding jacket with fringed skirt. It had guests reaching for their cameras -- with one guest commenting that it was the “Trojan chick.”

The rest of the embellished collection seemed less directly connected to the animal theme — and this level of subtlety was not a bad thing. There were strong equestrian styles, building on ideas from previous Viard seasons. Here, the riding jacket was a key theme, constructed in gleaming silken tweeds above gamine miniskirts and youthful skirts.

There were fun quirks galore in the long white gloves, black and white bow ties and skintight gold or black capped boots with white boxer-like lace ups — even though such accessories sometimes felt disconnected from the general aesthetic.

Couture is second nature to Chanel. The detailing of this superlative and at times poetical couture — which sparkled throughout with brocade, paillettes, sequins and gleaming silks — spoke for itself.

One loose amorphous gown glistened like a silver fish with its thousands of embroidered sequins and black, white and gold silken breast. Elsewhere, a thickly textured bell skirt was constructed using rippling layers of white-colored silk like a underwater shell. Or was it a delicate stratus cloud?

His couture fusion dripped with drama.

French designer Alexis Mabille mixed old-school Grecian draping with a take on the Indian sari in the bright colors of South Asian dress. It produced a soft spring collection with longer length silhouettes that used dozens of meters of floor-sweeping silk.

Bejeweled flowers adorned hairstyles, which like the dangling lengths of fabric, flowed freely.

A bottle green gown cut a sublime hourglass silhouette. It reshaped the model’s body, open at the sides, wider at the top, and held in place by a Grecian waistband. A cerulean blue gown, flowingly unstructured from a round neck and hanging to the floor, was notable for its pure simplicity.

Not everything was a hit, though, such as a blue hooded gown with slightly incongruous, spiked satin lapels and a misplaced belt that confused the eye.