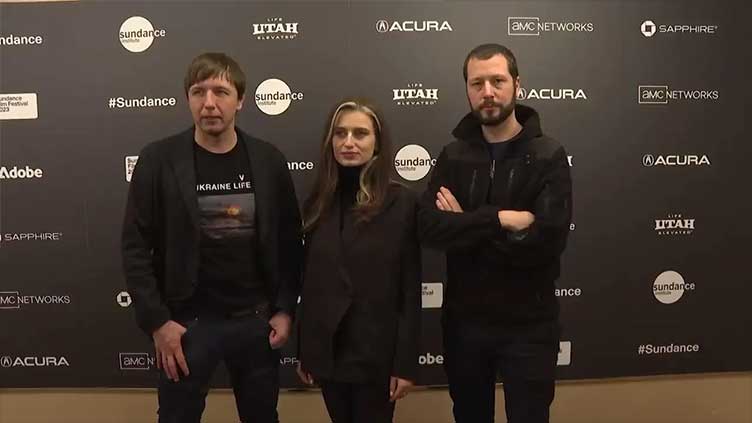 PARK CITY, Utah (Web Desk) — Associated Press video journalist Mstyslav Chernov had just broken out of Mariupol after covering the first 20 days of the Russian invasion of the Ukrainian city and was feeling guilty about leaving. He and his colleagues, photographer Evgeniy Maloletka and producer Vasilisa Stepanenko, had been the last journalists there, sending crucial dispatches from a city under a full-scale assault.

The day after, a theater with hundreds of people sheltering inside was bombed and he knew no one was there to document it. That’s when Chernov decided he wanted to do something bigger. He’d filmed some 30 hours of footage over his days in Mariupol. But poor and sometimes no internet connections made it extremely difficult to export anything. All told, he estimates only about 40 minutes of that successfully made it out to the world.

Chernov decided then that he wanted to make a documentary. That film, “20 Days in Mariupol,” a joint project between The Associated Press and PBS “Frontline,” premiered Friday at the Sundance Film Festival in Park City, Utah, where it is playing in competition.

There were, he knew, many ways to tell this story. But he decided early on to keep it contained to those harrowing first 20 days that he and his colleagues were on the ground, to evoke the claustrophobic feeling of being trapped. He also chose to narrate it himself and tell the story as a journalist would.

“It’s just a lens through which we see the stories of Mariupol’s residents, the death, their suffering the destruction of their homes,” he said. “At the same time, I felt that I can do it. I’m allowed to do it because I’m part of the community. I was born in eastern Ukraine and (a) photographer who worked with me was born in the city which is right next to Maruipol, which got occupied. So this is our story too.”

“It’s OK to tell the audiences about your emotions,” he said. “It’s just important to not let those emotions dictate what you show and don’t show .... While narrated by me, I still tried to keep it fair.”

He encounters quite a few different reactions to him and his colleagues being on the ground. Some thanked them for doing their jobs. Some called them prostitutes. Some doctors urged them to film graphic scenes of injured and dead children to show the world what had been done.

After Chernov left Mariupol and was finally able to catch up with the news reports around the world, he was stunned by the effect their footage seemed to have had. They followed up with people they’d met during their time there, some of whom got out, some who didn’t, and asked whether or not they’d affected their lives.

Some said relatives had found them because of the footage, or that they’d been able to get help. Doctors and officials said it made it easier to negotiate the green corridor to safety.

“I don’t know how much of that is our footage, how much of that is just what happens,” Chernov said. “But I really would like to believe that we did make a difference, because I guess that’s what journalism is about, to inform people so they make certain decisions.”

Another mission for him was to provide historical evidence for potential war crimes. Chernov is keenly aware that the war is not even history yet. It is a painful reality that is ongoing.

At Sundance he’s been able to watch the film, edited by “Frontline’s” Michelle Mizner, with an audience two times. The film got a standing ovation at the premiere. And a subsequent screening he met several audience members who said they were from Mariupol and that their relatives were escaping the sieged city at the same time he was. The theaters, had counselors on standby in case anyone needed support.
“I hoped they will have emotional responses and they did. But at the same time to watch people crying, it’s hard,” he said. “When you place an audience for 90 minutes into this chaos and this mess and this violence, there is a risk of people getting too overwhelmed or even pushed back by the amount of this violence.
“You just really want to show how it really was,” he added. “That was the main challenge of making choices while assembling the film. How do you show the gravity but at the same time not push the audience away? ... We had already two screenings and audience responses are very strong. People are crying, people are depressed and they express a wide range of feelings, from anger, to sadness, to grief. That is what I as a filmmaker intended to do. But at the same time, I realize that probably that’s not easy for everyone”
Now Chernov just wants to get back to work.
“I just want to go back,” he said. “After Sundance we will go back and go to the front line.”