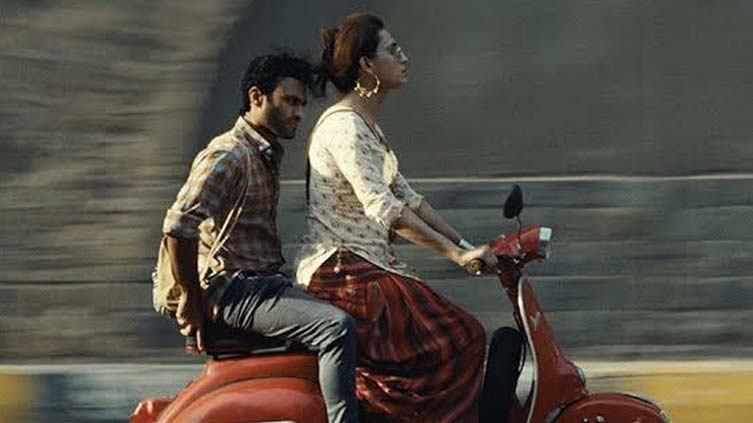 LAHORE (Online) - After earning accolades at Cannes, winning hearts at the international festival circuit and being considered favourites for a nomination at the Golden Globes, Pakistan’s submission to the Oscars may not see any joy in its own land. A letter initiated by a senator accompanied by "Joyland’s" rather tabooed themes of trans love may just end up working against its Pakistan release.

On Saturday, Jamaat-e-Islami Senator Mushtaq Ahmed tweeted a letter initiated by the Ministry of Information and Broadcast that deemed the previously certified film ’uncertified’.

“Whereas on the release of the film, written complaints were received that film contains highly objectionable material, which does not conform with the social values and moral standards of our society and is clearly repugnant to the norms of decency and morality as laid in Section 9 of Motion Picture Ordinance 1979,” stated the letter. “It also mentioned that the ’uncertification’ of the film applies to cinemas across Pakistan that fall under the jurisdiction of CBFC( Central Board of Film Certification).”

The letter shared by Ahmed raises two important questions; first of all, it cites complaints that were received following the ’release of the film’ whereas the film is actually scheduled to release in Pakistan on November 18. Who saw the film apart from the censor boards and raised the complaints has not been explained.

Secondly, after the 18th amendment the CBFC’s jurisdiction has been limited to ICT (Islamabad Capital Territory), cantonment areas across the country and provinces that don’t haven’t formed their own boards yet, i.e KP and Balochistan.

It is also pertinent to mention here that the film was certified for release by all the censor boards with minor objections and edits recommended for public screening. If the content of this letter is indeed executed then it would mean that the Federal government is overriding the decision made by the provincial censor boards.

Sources close to the board revealed that some members were initially skeptical about the content of the film and were not fully sure how the audiences will respond to a love story between a man and a trans person but they eventually did certify the film.

“Yes, it has been passed and certified with edits that have been conveyed to the producers and we are not sure of any other development so far,” the source told the publication.
A Punjab censor board official also confirmed the same. “We are not aware of any letter issued by the government. From our end, the film has been certified and ready for release,” said the official while requesting anonymity.
On the other hand, Distribution Club, the company responsible for distributing "Joyland" in Pakistan is trying its best to reach a middle ground. “Yes, we have received a letter from CBFC to stop the release of the film but nothing directly from the government or the provincial boards as such. The film has already been certified and is ready for release and we are 90% sure that the Pakistani audiences will get to watch "Joyland",” said the Distribution Club official.

Last week, Senator Ahmed urged the PDM-led government to stop the release of "Joyland" in Pakistan because of the ’anti-Islam’ values it promotes.

“It’s a Trans love story that has already won the Queer Palm award at the Cannes Film Festival and has been lauded for the LGBT themes it explores. This is nothing short of an anti-Islamic attack on the institutions of Nikkah and marriage, the Information Ministry must immediately stop the film from releasing in Pakistan,” Ahmed said in the video.

Team "Joyland", including Alina Khan, Rasti Farooq and Abdullah Siddiqui took to social media and shared a note regarding the apparent ban on their film.

"They’re doing it again! There are smear campaigns to ban "Joyland"," the statement read. Calling it a dark day for all artists in Pakistan, the note further read, "We need your support to make sure we don’t let these violent, insensitive, extremists win again." The team further appealed that the audience lends support to the film by tweeting #Release"Joyland" on Twitter.

Adding on, the statement read, "#Ban"Joyland" has been trending in Pakistan on number three because these people are doing a paid smear campaign. But we are going to count on you all to organically trend #Release"Joyland"." The statement concluded with, "Pakistani artists deserve better. When will this hooliganism end?"

Sarwat Gilani took to the micro-blogging website and shared while tagging the Ministry of Information and Broadcast’s official handle, There’s a paid smear campaign doing rounds against "Joyland", a film that made history for Pakistani cinema, got passed by all censor boards but now authorities are caving in to pressure from some malicious people who have not even seen the film."

Continuing, the Churails actor added, "Shameful that a Pakistani film made by 200 Pakistanis over six years that got standing ovations from Toronto to Cairo to Cannes is being hindered in its own country. Don’t take away this moment of pride and joy from our people!"

She then commented, "No one’s forcing anyone to watch it! So don’t force anyone to not watch it either! Pakistani viewers are smart enough to know what they want to watch or not. Let Pakistanis decide! Don’t insult their intelligence and our hard work!"

Several other artists such as Osman Khalid Butt, Tooba Siddiqui expressed disappointment over the call for "Joyland" to be boycotted. The "Balu Mahi" star, while tagging the Ministry of Information and Broadcast’s official handle, wrote, "Can you please confirm the authenticity of this letter (shared by a member of the Senate), because if "Joyland" has been declared an uncertified film, I’ve got some questions."

He continued, "The CFBC cleared "Joyland" for release in August. So the members of the Board had no issues with the theme/content of the film, correct? The film is set to release on November 18, which makes point two not just severely misleading but factually incorrect."

Butt commented, "As a nation that has celebrated "Joyland’s" many milestones and achievements, it is incredibly disheartening to see you cave under the pressure of ’written complaints’ (by who, exactly? Where and how have these people seen the film?)"

He further shared, "It’s baffling to me that even after "Joyland" made history at Cannes, after all the international critical acclaim it has received, after Pakistan itself submitted the film for Best International Feature at the Oscars, it is somehow (a week before release) unfit for our audiences?"
The "Chupke Chupke" actor then shared, "There are testimonies by people who’ve actually seen the film at Cannes, at TIFF (not those judging by hearsay/bias), who claim there’s absolutely nothing objectionable about "Joyland". We’ve seen the same happen with Verna, with Maalik, with "Zindagi Tamasha"."

Making a point, Butt went on, "Can our cinema please, for once, not be held hostage by what seems to be an entirely arbitrary Ordinance? There seems to be no issue with hyperviolence, regressive themes, adult jokes and content, or overt sexualisation onscreen but trans representation is where we draw the line?"

He concluded, "If the themes of "Joyland" (and this is a hypothesis - I haven’t seen the film) are too sensitive/mature for general audiences, then give it an appropriate rating. There’s precedent. But don’t deprive us of watching the film."

Siddiqui took to her Instagram and shared in a story, "A film that was made in Pakistan with Pakistani artists, the crew got globally recognised, passed all the Pakistani censor boards. But no. Flagbearers of our beliefs would not let it come through. I wonder when will this industry be progressed."

She then addressed the designer and shared, "At least watch the film first. Very sad and disappointing from Maria B."