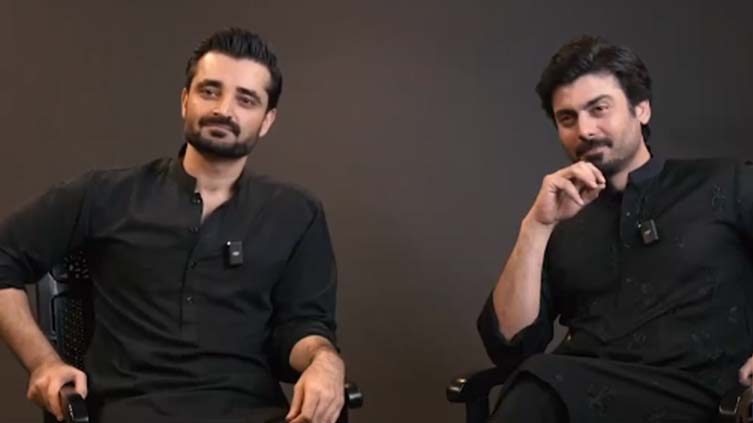 The "Legend of Maula Jatt" is slated to release worldwide on October 13, 2022.

LAHORE (Web Desk) - Two of the Pakistani showbiz industry’s most talented actors, Fawad Khan and Hamza Ali Abbasi, have stolen netizens’ hearts for yet another reason.

"The Legend of Maula Jatt" lead actors’ on-screen presence already had their millions of fans in a frenzy when they melted their hearts with their off-screen friendship. Abbasi and Khan were seen doing a friendly banter during an interview.

The video shows Khan and Abbasi pulling each other’s legs by cracking jokes about each other’s characters. The interviewer also asked the actors about their favourite breakfast to which the actors responded simultaneously, creating a jovial environment.

During another rib-tickling moment, Khan teased Abbasi when he said "film ka hero toh mein hii hoon. (I am the hero of the film)." To which the "Alif" actor replied, "But I am the villain".

Khan put an end to the friendly bantering and bickering by saying that the film’s name is "The Legend of Maula Jatt, not The Legend of Noori.

The "Humsafar" actor and "Pyarey Afzal" star s light hearted conversation received a pleasant response from their fans. The duo will be seen in protagonistic and antagonistic roles opposite each other in the Bilal Lashari directorial.

The "Legend of Maula Jatt" is slated to release worldwide on October 13, 2022.