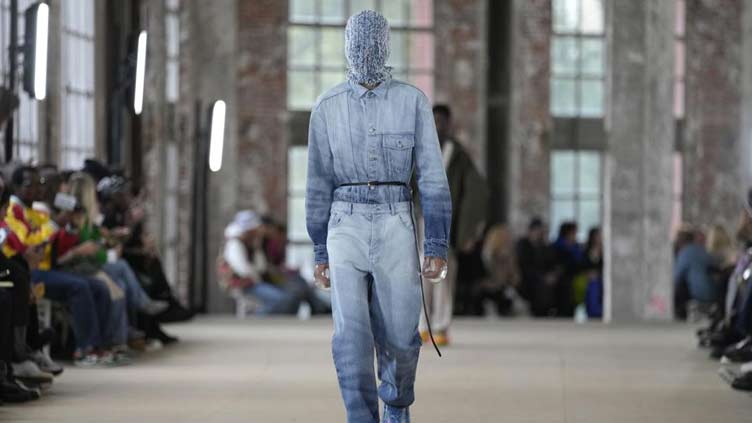 PARIS (AP) — Paris is the center of the global luxury industry this week with Tuesday marking the first major day of ready-to-wear shows. Powerhouses Saint Laurent and Dior are among some 107 brands showcasing spring-summer 2023 collections at Paris Fashion Week. Here are some highlights so far:

Guests including Nathalie Portman, Maggie Gyllenhaal, Rosamund Pike and Emma Raducanu looked curiously at a decaying palace recreated inside an annex of the Tuileries Gardens. Vines crept through Renaissance doors, over fading wooden cornices and down weathered columns to evoke the mystery of bygone times.

Based loosely on the Dior headquarters on Avenue Montaigne, the set was also inspired by Catherine of Medicis, the Renaissance queen who moved to the Tuileries in the 16th century. She had the famed gardens and a palace built on the site that has since been razed. Catherine also brought heels, corsets and Italian Burano lace to the French court — picked up by Dior designer Maria Grazia Chiuri in this thoughtful show of 84 looks, heavy on black and white.

Despite contemporary features such as sheeny fabrics and utilitarian toggles, Chiuri’s aesthetic rarely strayed from the history books. It made for Dior’s strongest show in seasons.

Heavy (15)80’s Renaissance ruches and ruffles ran down one skirt that was topped by a black “chainmail” vest that could have been worn at the YMCA in the (19)80’s. A little black dress was gloriously anachronistic with a skirt that ballooned out like the top of a full skirt, but reined in with sporty toggles.

Distressed double denim continued the underwater vibe on one male model who plodded down the runway with a blue knitted mask over his entire face, and transparent globules over his hands. It made him look as if he had been attacked by a jellyfish. Or Rushemy Botter and Lisi Herrebrugh’s show may have been another dig at the coronavirus pandemic.

A flash of American funk graced Paris for Monday’s installment of fashion week — a day reserved for up-and-comers. Vaquera, who came to prominence five years ago in New York with a U.S. flag gown with massive train, moved this season across the pond and was a highlight.

Designers Patric DiCaprio and Bryn Taubensee mixed their edgy styles with looks that moved in a more commercial direction for spring-summer. Distressed denim, the punk exuberance and corsetry of Vivienne Westwood’s heyday and lashings of Americana references — like a loose sheeny biker jacket — defined the often-saleable 31-look display.

The U.S. flag made its runway return, here as a sheer shawl that led down to a fabulous ballooning parachute skirt.

The first major party of the season celebrated one of Paris’ most iconic perfume and cosmetic brands: Lancome. A stone staircase dappled in colored light led VIP guests including model Noemie Lenoir into the palatial Petit Palais venue by the banks of the Seine River Monday night.

This season Lancome, owned by L’Oreal, celebrated the 10th anniversary of its best-selling French perfume “La Vie Est Belle” — or “life is beautiful.” Victoria’s Secret model Sara Sampaio also made the party in the famous art museum in a black mini with frills.