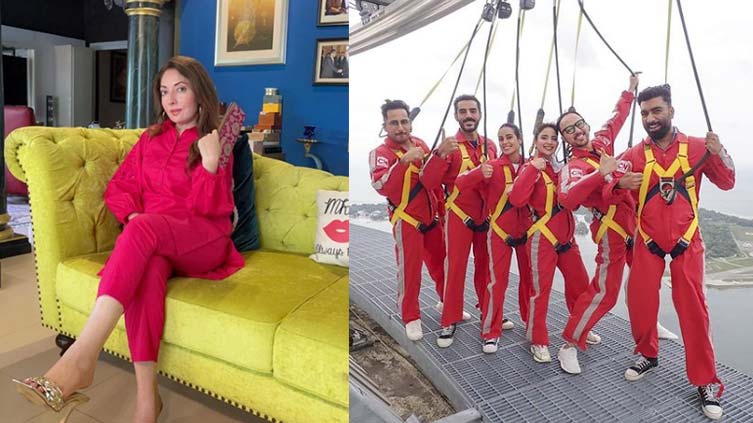 LAHORE (Web Desk) - Pakistan Peoples Party (PPP) leader Sharmila Faruqi is disappointed with the Pakistani celebrities (with the noted exception of Hadiqa Kiani) for not doing enough for flood relief. In an Instagram post, she shared pictures of several celebrities in Canada for the Hum TV Awards juxtaposed with photos of Hollywood actor Angelina Jolie in Pakistan.

“Here is Angelina Jolie visiting our worst flood affected district Dadu, spreading love and hope, appealing to the international community to come for our help,” she wrote, sharing pictures of Jolie’s trip to Pakistan during which she has met several people affected by the floods. Jolie is the special envoy for the UN refugee committee, the UNHCR, and served for 11 years as a goodwill ambassador for the committee.

“On the other hand, are our Pakistani shining stars all in Toronto for Hum TV awards, making merry and ready for some scintillating performances,” she wrote, sharing pictures of Hania Aamir and Farhan Saeed at dance practice, Saboor Aly, Nomi Ansari, Iqra Aziz and Adeel Hussain at the Edge Walk at the CN Tower in Toronto and Urwa Hocane at a dance practice.

“Not a single one of them even bothered to visit any flood affected area or show any solidarity in cash or kind except for Hadiqa Kiani, for one truly believe in cultural activities, award shows, performances etc, our artists and actors are second to none,” she wrote. Kiani, the singer, has been very actively campaigning for donations for her charity organisation Vaseela. She recently announced that she would be “adopting” villages in Sindh and Balochistan and rebuilding them.

“It would have been a great support if all of them had reached out to their fellow countrymen who have lost their homes, lives and livelihood to the devastating floods. There is a time for everything, to celebrate, to mourn… we have a humanitarian crisis in our country, this is the time to stand by them, with them, to hold, support and love them. Each one of us has a responsibility towards our nation and its people who have given us so much. It’s payback time,” wrote Faruqi, who last served as a member of the Sindh Assembly from 2013 to 2018.

On the other hand, former Pakistan film star Noor Bukhari also criticised Pakistani celebrities except for singer Hadiqa Kiani and Actress Resham.
As per reports, a portion of ticket sales from the Hum Awards is also going to be donated to flood relief efforts.