Angelina Jolie meets flood victims on her visit to Pakistan 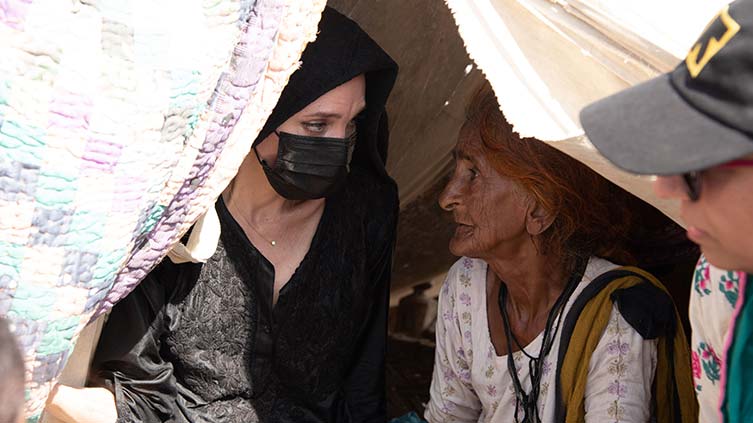 Angelina Jolie meets flood victims on her visit to Pakistan

Angelina Jolie meets flood victims on her visit to Pakistan.

LAHORE (Web Desk) - Hollywood actress and UN humanitarian Angelina Jolie made a surprise visit to one of the worst flood-hit areas in southern Pakistan on Tuesday, officials said, as the death toll from months-long deluges rose to 1,559.

A footage showed Jolie arriving at an airport in Karachi, the capital of southern Sindh province, where floods since mid-June have killed 692 people, damaged hundreds of thousands of homes and left half a million people homeless.

Later, she visited some of the flood-affected areas.

According to the IRC, a prominent international aid group, Jolie is visiting Pakistan to support communities affected by the devastating floods. There was no comment from the government about Jolie’s visit to Dadu, one of the worst-hit districts where waterborne diseases have also caused nearly 300 deaths since July. Currently, doctors are trying to contain the outbreak of waterborne diseases among flood survivors.

The visit comes as Pakistan’s Prime Minister Shahbaz Sharif is in New York for the 77th session of the UN General Assembly (UNGA).

In his speech, PM Shehbaz will highlight the damages caused by climate-change induced floods in the impoverished country. Pakistan says the floods have caused $30 billion in damages to Pakistan’s economy.