'Squid Game' in focus as Emmys kick off 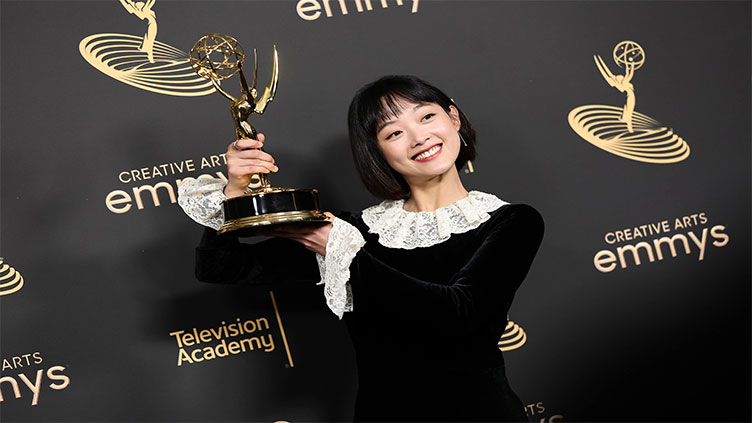 'Squid Game' in focus as Emmys kick off

Host Kenan Thompson opened the proceedings with a dance number set to a medley of TV show themes.

LOS ANGELES (AFP) - The glitzy Emmy Awards kicked off in Hollywood on Monday with A-listers in their gowns and tuxedos for the first full gala honoring television s best after several years of Covid-limited productions.

Host Kenan Thompson opened the proceedings with a dance number set to a medley of TV show themes, including "Friends" and "Game of Thrones," before bringing on talk show legend Oprah Winfrey, who lauded "the most successful broadcast medium in the world: television."

The first award of the night went to Michael Keaton for best actor in a limited series for "Dopesick," looking at the US opioid epidemic.

But all eyes were on the drama categories and "Squid Game," the South Korean sneak hit in which misfits and criminals compete for cash in barbaric and deadly versions of schoolyard games.

The Netflix show is hoping to emulate the success of Oscar-winning South Korean movie "Parasite" with a triumph at TV s top prize gala.

It faces tough competition from previous winner "Succession," the tale of a family vying for control of a media empire -- rife with Shakespearean backstabbing -- that earned the most nominations overall at 25.

"I do think ( Squid Game ) is going to win best actor," noted Hammond -- an outcome that would make Lee Jung-jae the category s first winner for a non-English performance.

The South Korean series has already tasted Emmys victory, with four trophies at a pre-gala event at which many statuettes are awarded in minor categories, including one for Lee Yoo-mi for best guest actress in a drama.

In the best actor category, star Jason Sudeikis is up against Bill Hader, whose dark hitman comedy "Barry" returns from a three-year absence.

Jean Smart is heavily tipped to repeat as best comedy actress for "Hacks," in which she plays an aging Las Vegas diva forced to reinvent her dated stand-up routine.

Offering some fresh blood are the nominees in the limited series section, which honors shows capped at a single season.

"Dopesick" looks at the US opioid crisis, "The Dropout" recounts the Theranos fraud, "Pam and Tommy" recalls an infamous celebrity sex tape and "Inventing Anna" is inspired by a Russian con artist who scammed upper-crust New York.

But the pundits  favorite in a tight race is "The White Lotus," a satirical look at hypocrisy and wealth among the guests at a luxury Hawaii hotel.

The show -- which is bending Emmy rules for limited series having returned for a second season, albeit with a largely new cast and location -- has a whopping eight acting nominations, including for Jennifer Coolidge.

It took five statuettes at the Creative Emmys.

Monday s ceremony is expected to mark a return to normality, after the Covid-19 crisis forced producers to get creative with recent remote and socially distanced editions.

The show at a downtown Los Angeles theater is the first major Hollywood awards ceremony since this year s extraordinary Oscars.

Back in March, Will Smith stunned viewers by slapping Chris Rock live on stage for cracking a joke about his wife.

"We have smart security. We have people around that make quick decisions," Television Academy head Frank Scherma told Deadline.

"I can t imagine that lightning will strike twice."