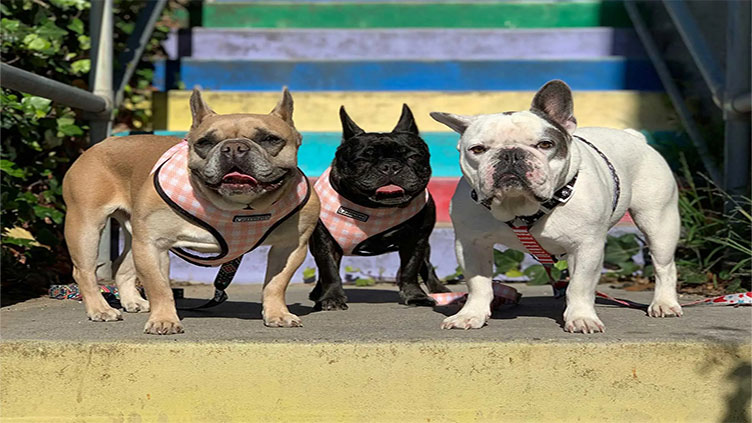 A California court sentenced one of three men charged in the armed robbery of Lady Gaga's dog.

LOS ANGELES (AFP) - A California court on Wednesday sentenced one of three men charged in the armed robbery of Lady Gaga s dog walker, in which the singer s French bulldogs were stolen, to four years in prison.

Jaylin Keyshawn White admitted to being part of a gang that shot Ryan Fischer as he exercised the three prize pets in Hollywood in February 2021.

At a court hearing in Los Angeles on Wednesday, White, now 20, pleaded guilty to second-degree robbery, and received a four-year prison sentence.

Surveillance footage from the scene of the attack shows a car stopping near Fischer and two people jumping out.

One demands that Fischer "give it up" before a struggle, in which a gunshot is heard, and the dog walker falls to the ground, screaming.

The attackers each grab one dog -- Koji and Gustav -- and leave Fischer shouting for help.

The third dog -- Miss Asia -- ran back to the dog walker after the robbers drove away.

The robbery led the "Poker face" singer to offer a $500,000 reward for the return of the animals, whose theft highlighted a growing trend targeting the valuable breed.

White had been charged in April 2021 along with James Howard Jackson, now 19, and Lafayette Shon Whaley, now 28.

The woman who police said handed in the dogs in response to the reward, has been charged with being an accessory after the fact and with receiving stolen goods.

The alleged gunman, Jackson, was mistakenly released from custody earlier this year after what the US Marshals Service described as a "clerical error".

They have offered a reward of up to $5,000 for information leading to his arrest, saying that he should be considered "armed and dangerous."

Fischer sustained chest injuries in the attack, and said on Instagram a month later he had suffered a collapsed lung.

Los Angeles police said at the time of the robbery they did not believe the dogs had been targeted because of their owner, but because of the value of the breed on the black market.

Small and friendly -- and thus easy to grab -- French bulldogs do not have large litters.

Their relative scarcity, and their association with stars such as Lady Gaga, Reese Witherspoon, Hugh Jackman, Chrissy Teigen, Leonardo DiCaprio, and Madonna gives them added cache, and means they can change hands for thousands of dollars.