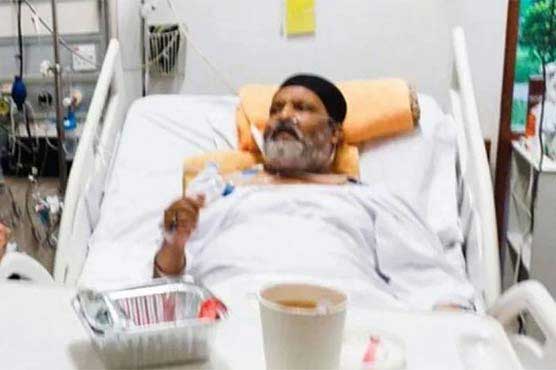 KARACHI (Dunya News) - The air ambulance which arrived in Karachi on Monday to take legendary comedian Umer Sharif to the US for treatment has delayed its departure for three hours, Dunya News reported.

Uncertainty has arisen over the issue of sending legendary comedian Umer Sharif to the US for treatment, while the actor’s wife sought help from the prime minister and appealed to intervene to stop the air ambulance.

According to sources, the departure of renowned actor for treatment abroad was postponed today due to critical condition of health. His blood pressure dropped while he was undergoing dialysis. He has been moved to critical care unit (CCU) and will now be kept under observation for 48 hours.

An air ambulance had reached Karachi for taking Umer Sharif to the US. Doctors say the next 48 hours are important for his health.

Umer Sharif’s wife said that doctors advised him yesterday not to travel for the next 24 hours due to low blood pressure, on the other hand, the air ambulance administration had given a maximum of 12 hours to wait for transporting him to the US.

Umar Sharif’s wife complained that the air ambulance administration had earlier taken 72 hours for preparing the travel documents. The health condition of Umer Sharif had further worsened when the air ambulance took six days to arrive in Pakistan, she added.

Earlier in the day, an air ambulance to take ailing veteran Pakistani comedian Umar Sharif to United States for medical treatment had landed in Karachi.

According to details, the doctors are waiting for the artist’s health to get stable after which, the travel will start.

Meanwhile, Umar Sharif’s wife Zareen Ghazal told that his husband’s departure to US is conditioned with the approval of the doctors.