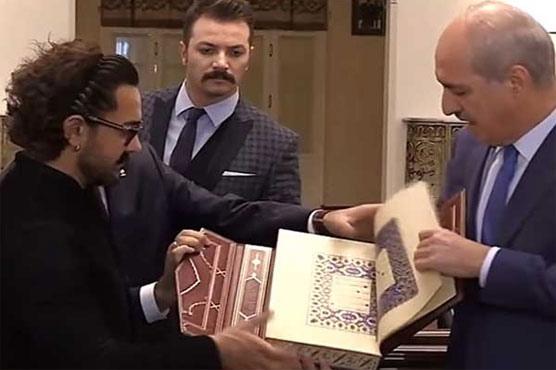 Amir khan is in turkey for the promotion of his new film "The Secret Superstar".

(Web Desk) – Indian superstar Amir Khan was recently gifted a unique copy of the Holy Qur’an by the Turkish government during his Turkey tour for promotion of his upcoming film, Indian media reported.

Khan has a worldwide fan following, evident from the fact that his film “Dangal” made a record breaking extraordinary profit of INR 10 billion in China, fulfilling Amir’s wish for his movies to be seen worldwide.

During his visit to Turkey, he met Turkish President Recep Tayyip Erdogan and photos of their meeting were shared on Twitter from the presidential palace.

Amir Khan was pleased to receive the invaluable gift. He was handed the manuscript by the minister of culture and tourism Prof. Dr. Numan Kurtulmus.

Khan also invited the minister for a visit to India as a gesture of goodwill.

Erdogan steps up US row with ambassador boycott

Turkey urges US to reverse visa halt, summons another staffer