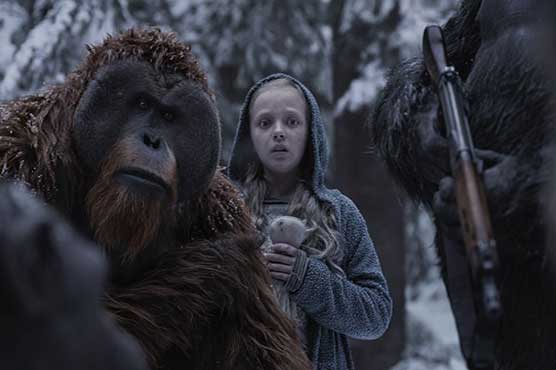 The film has done much better overseas than at home.

LOS ANGELES (AFP) - "War for the Planet of the Apes" won this weekend’s battle of the box office in North America, riding on strong reviews and ever more natural-looking apes to take $56.3 million.

The Fox/Chemin Entertainment production managed to outdraw "Spider-Man: Homecoming," which fell by more than half from its opening three-day weekend to pull in $44.2 million, website Exhibitor Relations reported.

"War," directed by Matt Reeves, tells the continuing story of how intelligent primate Caesar (Andy Serkis) and other apes battle the forces led by an evil human dictator (Woody Harrelson). The film, made for $150 million, has a 95 percent approval rating on the Rotten Tomatoes website, which collates reviews.

Far behind on $19.4 million was Universal’s animated sequel "Despicable Me 3," starring Steve Carell as the voice of bad guy-turned-protagonist Gru -- and his twin brother Dru, and Kristen Wiig as Gru’s wife Lucy.

The film has done much better overseas than at home, according to Hollywood Reporter, which says its global gross of $519.4 million includes a whopping $113.6 million from viewers in China.

Placing fourth was Sony’s heist thriller "Baby Driver," with Ansel Elgort ("The Fault in our Stars") front and center as a gifted getaway driver with a hearing problem. It netted $8.7 million.

And in a surprising fifth place among the big-studio blockbusters was independent rom-com "The Big Sick" from Lionsgate, taking in $7.5 million in its first week in wide release.

"Sick" stars Kumail Nanjiani in the semi-autobiographical role of a Pakistani-American stand-up comic who resists his parents’ insistent efforts to find a wife for him, and instead falls in love with comedy-club customer Emily, played by Zoe Kazan.

The film, co-written by Nanjiani and the real-life Emily, his wife, rates a resounding 97 percent on Rotten Tomatoes and is credited by the New York Times with no less than "revitalizing an often moribund subgenre with a true story of love, death and... everyday comedy."

Rounding out the top 10 were: