VIDEO: A fan girl comes up on stage to meet Atif Aslam during concert 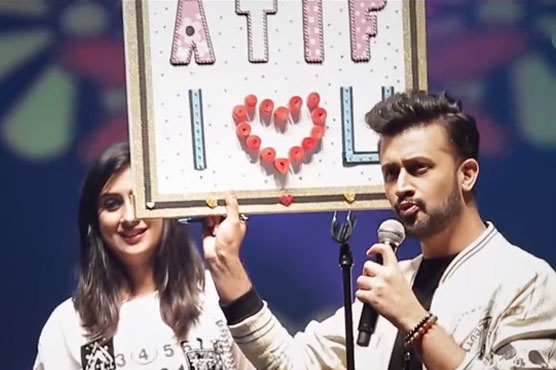 (Web Desk) - Atif Aslam recently did a concert in Dubai where large audience including fans from India and Pakistan came to see him put an exciting show. A fan girl also showed up with  Atif I love you  postcard and was invited on the stage by the pop star himself.

As soon as she arrived, the fan girl handed over her postcard to Atif, on which he gave his autograph later on. She looked very excited to meet his favourite singer. Atif showed his postcard to the audience and appreciated the effort. The girl then asked the artist to allow taking pictures with her.

She posed her pout with Atif, but that wasn t it. She noticed that there was a mic stand blocking the camera lens, so she removed it quickly to take another set of photographs with the singer. The fan girl kept chattering with Atif Aslam till he finally asked her to leave the stage and let him carry on with the concert.

He then continued with his singing and entertained the enthusiastic gathering with recent and popular songs.

Husband deported from UAE after insulting wife via WhatsApp