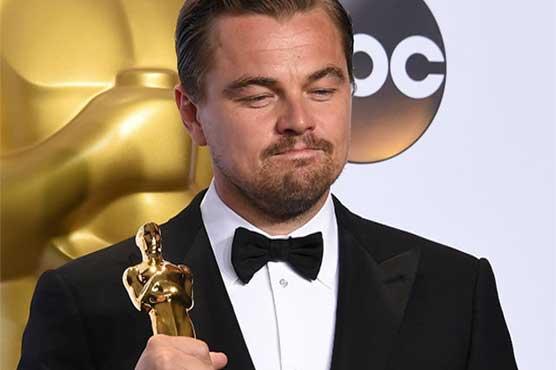 DiCaprio offered to surrender to US authorities any gifts "from parties named in civil complaint."

LOS ANGELES (AFP) - Hollywood star Leonardo DiCaprio confirmed Friday that he has turned over an Oscar won by Marlon Brando, along with other gifts, amid an inquiry into a multibillion-dollar money-laundering scheme involving a Malaysian sovereign wealth fund.

US authorities are seeking to recover billions in money and assets allegedly embezzled by businessmen with political connections in Malaysia. The scandal has rocked the Malaysian governing class, exposing Prime Minister Najib Razak to allegations of corruption, which he has denied.

A spokesman for DiCaprio said in a statement that the 42-year-old actor had contacted the US Justice Department last July after learning of a civil action against "certain parties involved in the making of ‘The Wolf of Wall Street,’" a movie in which DiCaprio starred.

He offered to surrender to US authorities any gifts "from the parties named in the civil complaint."

DiCaprio "initiated return of these items," said the statement provided to AFP. It said he did so before the US government on Thursday filed a new complaint that cited the Red Granite production company behind "The Wolf of Wall Street."

"He has also returned an Oscar originally won by Marlon Brando, which was given to Mr. DiCaprio as a set gift by Red Granite to thank him for his work on "The Wolf of Wall Street.’"

US authorities announced Thursday that they intended to seize more than a half-billion dollars in additional assets acquired with money embezzled from the 1MDB Malaysian sovereign fund, at the heart of a vast international scandal.

Those assets include a $261 million yacht purchased by Malaysian businessman Jho Low, as well as paintings by Picasso and Jean-Michel Basquiat; and the royalties of "Dumb and Dummer To" and "Daddy’s Home."

Those films were also produced by Red Granite, a Los Angeles company co-founded by Riza Aziz, son-in-law of Razak.

In a statement received Friday, Red Granite said it was in "active" discussions with the Justice Department.

The US authorities first moved in July 2016 to recover some $1 billion in assets, including private jets, luxury apartments and royalties from "The Wolf of Wall Street."

The Justice Department said those assets had been acquired as part of an "international conspiracy" intended to launder billions of dollars embezzled from 1MDB, or 1Malaysia Development Berhad, a public fund created in 2009. Razak is its advisory chair.

Razak created the fund shortly after coming to power in 2009, saying it would help modernize the country.

1MDB now carries debt of some 10 billion euros ($11.2 billion). The prime minister and fund officials have consistently denied any wrongdoing.