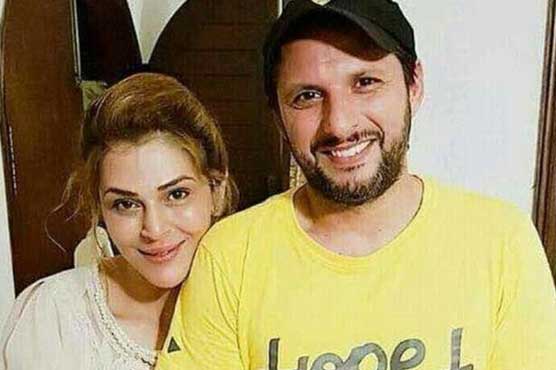 (Web Desk) - Sana Bucha threw an exclusive sehri for famous faces among Pakistani celebrities. Among those invited was Shahid Afridi.

Shahid Afridi later posted on Twitter about the sehri and thanked Sana Bacha for the sehri. He tweeted, "Thank you sister @sanabucha for the fantastic Suhoor last night,it was a pleasure catching up with the faces of Pak Entertainment Industry."

Thank you sister @sanabucha for the fantastic Suhoor last night,it was a pleasure catching up with the faces of Pak Entertainment Industry pic.twitter.com/AyQxHrJK92

The first thing that fans noticed was Shahid Afridi’s use of the word ‘sister’ for Sana Bucha. Many fans of both the celebrities took this in good humour and trolled Sana Bucha for being ‘behnzoned’ by Shahid Afridi. Some even pointed out how awkward Shahid Afridi looked surrounded by the women and how he was pulling himself away from Sana Bucha.

As usual, there were many haters who criticised Shahid Afridi for attending the sehri. Some pointed out that it was hypocritical of Shahid Afridi to get his pictures with these celebrities. One user even went as far as to imply that Shahid Afridi keeps his wife in a niqab while he gets his pictures taken with women that don t cover themselves. And finally there were some who criticised Sana Bucha for standing so close to Shahid Afridi. Someone also pointed out that the cricketer called Sana his  sister  in order to avoid controversy. Maybe he was trying to point out that because Shahid Afridi was married, calling Sana his sister was an attempt to prevent any speculations with regards to him and Sana.

Sana Bucha finally put out a tweet in response to the incident and in an apparent attempt to put down such speculations explained how Shahid Afridi treated her like a sister. She tweeted, "V may not be of same blood but nothing is better than a man who doesn t only call U his sister but treats u like one.Lala!"

V may not be of same blood but nothing is better than a man who doesn t only call U his sister but treats u like one.Lala! @SAfridiOfficial https://t.co/z8VaRZSFrr

Even after Sana’s tweet, people still criticised her for the pictures with some saying that she had put Shahid Afridi s reputation at stake with the pictures. One user seemingly pointed out that Shahid Afridi had to call Sana his sister because the picture implied otherwise.