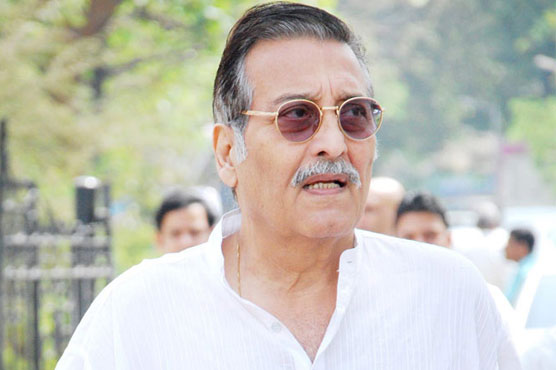 At the time of migration, Vinod Khanna was an infant, but he had love for his birth city.

PESHAWAR (APP) - Legendary Indian actor, Vinod Khanna, who died on Thursday at the age of 70 in Mumbai after protracted illness, had roots in Peshawar.

“Late Vinod Khanna was the son of Mehr Chand Khanna, a prominent businessman and former minister in Congress party. He was born in Peshawar on October 6, 1946 at Sardar area in Cantonment jurisdiction,” Muhammad Ibrahim Zia, a known film historian from Peshawar said.

Talking to APP, Zia said he met Vinod Khanna in 2014 during a visit to India as being a member of the delegation which went to inquire after the health of the top Indian film industry legend, Dilip Kumar, who also belonged to Peshawar.

“During the visit, we had a meeting with Vinod Khanna in New Delhi, who was very happy over reunion with people of his birth place (Peshawar),” Zia recalled.

He said Mehr Chand Khanna, father of Vinod Khanna, was a well off person of Peshawar and had migrated to India in 1947. At the time of migration, Vinod Khanna was an infant, but he had love for his birth city.

Zia recalled that in the late 1990s during a function held in Dubai Vinod Khanna had announced on the stage with pride that he was a ‘Peshawari.’

He said the ancestral home of Vinod Khanna was intact and presently in use of Khyber Pakhtunkhwa chapter of All Pakistan Women’s Association (APWA).

During the meeting with Vinod Khanna, Zia said, the delegation presented him gifts including ‘Peshawari Chappal’ (sandals) and traditional dress, which he accepted very happily.

Zia told that he also presented a copy of his book, Peshawar Key Funkar (Artists of Peshawar), to the legend star. The book gives detailed history of big screen actors who belonged to Peshawar and worked in different film industries during the last 100 years.

Shakeel Waheedullah, General Secretary Cultural Heritage Council KP, was also part of the delegation which met the Indian actor in 2014.

“During his autograph, Vinod Khanna had extended his good wishes to people of Peshawar and expressed desire to visit his ancestral city. The actor wanted to visit Peshawar to see his home and area where his parents and forefathers used to dwell,” he added.

Shakeel revealed that he had also sent a request at official level for Khanna’s visit to Pakistan, especially Peshawar, but the proposal was not finalised.

Shakeel asserted that the Cultural Heritage Council would soon hold a reference in memory of late Vinod Khanna to pay homage and to apprise the people of Peshawar that the Indian film legend belonged to their city.