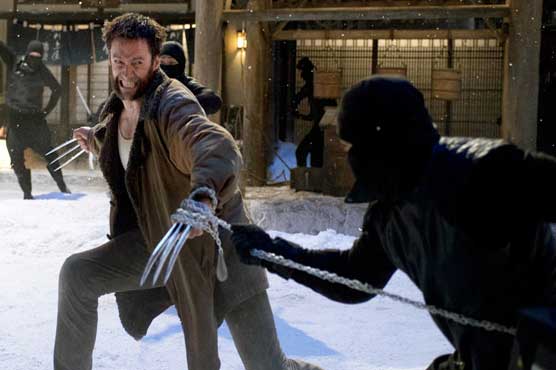 The sixth installment of the X-Men superhero franchise took in $53.1 million.

"The Conjuring," starring Patrick Wilson and Vera Farmiga in a drama about paranormal investigators, scared up $22.2 million on its second weekend.

Dropping a notch to third place was "Despicable Me 2," with Steve Carell as a villain-turned doting father, which made $16.4 million.

Behind it came "Turbo," a computer-animated comedy about a speed loving snail, which took in $13.7 million its second weekend in theaters.

"Grown Ups 2," about a summer reunion of middle-aged men, starring comedians Adam Sandler and Chris Rock, was in fifth place with a weekend return of $11.6 million.

Action comedy "Red 2" was sixth, with a $9.4 million take on its second weekend in theaters. The sequel stars Bruce Willis, John Malkovich and Helen Mirren in a hunt for a missing nuclear device.

"Pacific Rim" and its Godzilla-like monsters slipped to seventh place, with $7.7 million, while "The Heat" with Sandra Bullock clung to eighth at $6.9 million in its fifth weekend in theaters.

Supernatural flick "R.I.P.D," about a police force in the afterlife, was ninth at $6.0 million.

"Fruitvale Station," a prize-winning drama about the last day in the life of a young black man killed by a police officer at Oakland, California metro station, delivered a box office surprise.

It jumped to 10th place from 17th, making $4.6 million in its third weekend in theaters.