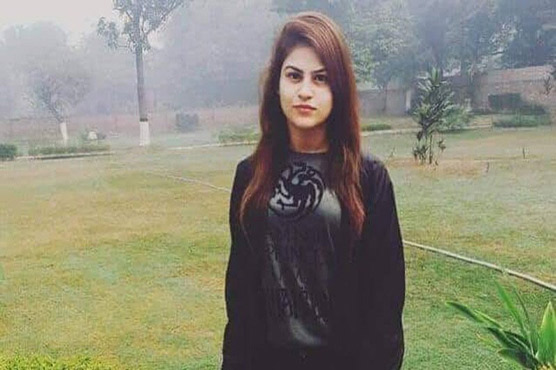 The investigation officials will know from Dua what she knows about the location she was taken to.

KARACHI (Dunya News) – An investigation team on Sunday will record statement of 20-year-old law student Dua Mangi – who returned home on Saturday a week after she was kidnapped by armed men from Karachi’s Bukhari Commercial of DHA while her friend Haris Fatah Soomro was shot and wounded.

The investigation officials will know from Dua what she knows about the location she was taken to and how much ransom was paid for her release.

While talking to the media after her release, the girl’s family had refrained from telling further details how she returned back home.

Dua’s mother thanked the media for raising the issue, and said that her recovery was made possible due to the awareness spread by the media. The abductee’s father said: “I thank everyone who supported us in this dire situation and my daughter has reached home safely because of all of you.”

While shedding light on the case, police reported that they were kept unaware of details and bargaining between the abductors and Dua’s family.

Despite of claiming to investigate into the case thoroughly, the police had failed to recover Dua and she was only released after her family had to pay ransom to the kidnappers.

However, investigation team has claimed that the girl was released following an alleged police encounter with her kidnappers near Aziz Bhatti area. In the exchange of fire, two policemen were injured and one of the suspect sustained bullet wounds.

Police sources told the media that the ransom was paid near a mosque in South Zone, and the investigation team was not taken into confidence before the amount was paid to the kidnappers.

According to sources, the kidnappers used the internet device, which was purchased from Peshawar, the provincial capital of Khyber Pakhtunkhwa.

Dunya News reported that police claimed that the criminal elements didn’t belong to Karachi but somewhere around Peshawar or its suburbs.

According to the Karachi police spokesperson, police were investigating the case from different aspects and more than a dozen persons had been questioned.

The police and Citizens-Police Liaison Committee were also probing into the case from the perspective of a past kidnapping case, according to a police statement.

Dua’s family members had also received suspicious phone calls on the internet from suspected kidnappers, and subsequently informed the police about it.

After that information, police widened the scope of investigations into the case, and have been examining previous kidnapping for ransom cases to trace any evidence for the suspects. Many previous unresolved cases are also being investigated.

According to earlier report, the perpetrators took off with Dua in a grey Honda Civic, the model of which was around four years old.

Police also investigated the cell phone data of both the victims and geo-fencing of the site will also be carried out.

Police obtained eight different CCTV footages of the incident and have obtained statement of a rickshaw driver, who is claimed to have seen the incident.

On Thursday, DIG Kharal had said: "It appears to be a case of kidnapping for ransom." He had said that it had been ascertained through investigation that the student was kidnapped for ransom, without elaborating. The DIG South was leading different teams of police probing the incident.

An FIR was registered at Darakshan Police Station against unidentified men, under Sections 324 [attempted murder] and 365 [kidnapping or abducting with intent secretly and wrongfully to confine person] of the Pakistan Penal Code, on behalf of the injured man’s father.