Six killed in China as driver speeds into pedestrians 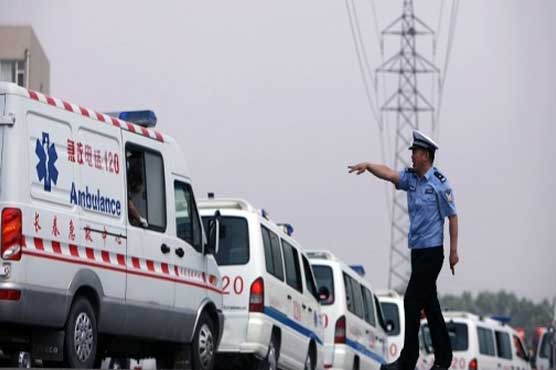 Six killed in China as driver speeds into pedestrians

Another 13 people were injured by the man, who emerged from his badly damaged Lexus vehicle.

Another 13 people were injured by the man, who emerged from his badly damaged Lexus vehicle threatening to detonate a can of petrol before he was overpowered by police using water cannon, the Southeast Express newspaper said.

The report quoted a source as saying the 37-year-old was upset that his wife wanted a divorce, while a statement by local police in the eastern city of Fuzhou said he was experiencing "marital problems".

The youngest of the dead was a boy toddler, while a girl in her third year of primary school was also among those killed, the Southeast Express said.

"The man emerged from the car with the petrol and threatened to detonate it," the report said.

"Local police sprayed the man with water cannon to subdue him."

Pictures posted online by witnesses purported to show the driver s saloon car with a badly damaged front and dents along the side.

China has seen a number of violent attacks in recent years, which are largely carried out either by people upset at their personal situation or citizens disgruntled with their treatment by the government.

Last June an arsonist killed 47 people including himself on a bus in Xiamen in the eastern province of Fujian. The man caused the fire to "vent personal grievances", according to authorities.

A man was also sentenced to death Monday for setting off deadly blasts near a provincial Communist Party headquarters in the northern province of Shanxi last November, killing one person and injuring 17.