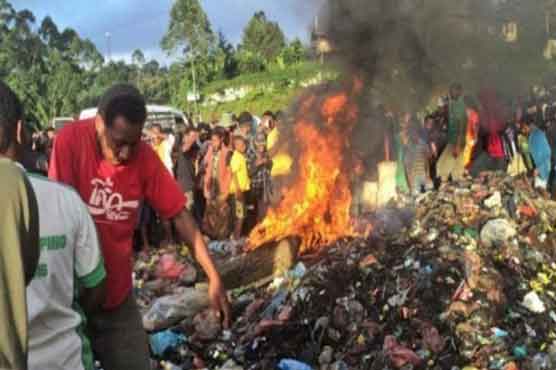 PORT MORESBY:  A mob stripped, tortured and bound a woman accused of witchcraft, then burned her alive in front of hundreds of witnesses in a Papua New Guinea town, police said Friday in the latest sorcery-related murder in this South Pacific island nation.

Hundreds of horrified bystanders, including many children, watched and some took photographs of Wednesday s brutal slaying. Grisly pictures were published on the front pages of the country s biggest circulating newspapers, The National and Post-Courier, while the prime minister, police and diplomats condemned the killing.

In rural Papua New Guinea, witchcraft is often blamed for unexplained misfortunes. Sorcery has traditionally been countered by sorcery, but responses to sorcery allegations have become increasingly violent in recent years.

Kepari Leniata, a 20-year-old mother, had been accused of sorcery by relatives of a 6-year-old boy who died in the hospital the day before.

She was tortured with a hot iron rod, bound, doused in gasoline, then set alight on a pile of car tires and trash in the Western Highlands provincial capital of Mount Hagen, national police spokesman Dominic Kakas said.
Deputy Police Commissioner Simon Kauba on Friday blasted Mount Hagen investigators by phone for failing to make a single arrest, Kakas said.

The public were apparently not cooperating with police, and police carrying out the investigation were not working hard enough, Kakas said.

"He was very, very disappointed that there s been no arrest made as yet," Kakas said.

"The incident happened in broad daylight in front of hundreds of eyewitnesses and yet we haven t picked up any suspects yet. He was very, very curious about that and he blasted the investigators on the phone," Kakas added.

Kakas described the victim s husband as the "prime suspect" and said the man fled the province. Kakas said he did not know if there was a relationship between the husband and the dead boy s family.

He said more than 50 men and people are suspected to have "laid a hand on the victim" and committed crimes in the mob attack. While many children had witnessed the murder, there were no child suspects, he said.

Kakas said onlookers were shocked by the brutality but were powerless to stop the mob. Police officers were also present but were outnumbered and could not save the woman, he said. There is an internal investigation underway into what action police at the scene took.

"We are in the 21st century and this is totally unacceptable," Kulunga said in a statement.

He suggested courts be established to deal with sorcery allegations, as an alternative to villagers dispensing justice.

Prime Minister Pete O Neill said he had instructed police to use all available manpower to bring the killers to justice.

"It is reprehensible that women, the old and the weak in our society should be targeted for alleged sorcery or wrongs that they actually have nothing to do with," O Neill said.

The U.S. Embassy in the national capital Port Moresby issued a statement calling for a sustained international partnership to enhance anti-gender-based violence laws throughout the Pacific.

The embassy of Australia, Papua New Guinea s colonial ruler until independence in 1975 and now its biggest foreign aid donor, said "We join ... all reasonable Papua New Guineans in looking forward to the perpetrators being brought to justice."

In other recent sorcery-related killings, police arrested 29 people in July last year accused of being part of a cannibal cult in Papua New Guinea s jungle interior and charged them with the murders of seven suspected witch doctors.

Kakas could not immediately say what had become of the 29 since their first court appearances last year in the north coast province of Madang.

Police alleged the cult members ate their victims  brains raw and made soup from their penises.

The killers allegedly believed that their victims practiced sorcery and that they had been extorting money as well as demanding sex from poor villagers for their supernatural services.

Murder in punishable by death in Papua New Guinea, a poor tribal nation of 7 million people who are mostly subsistence farmers. But no one has been hanged since independence.