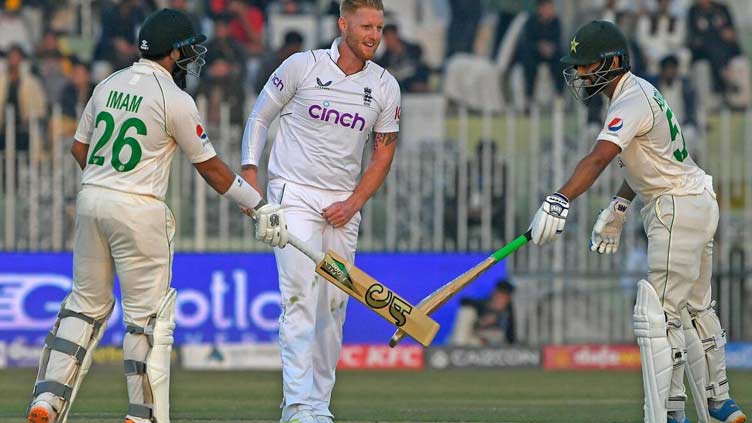 RAWALPINDI (Reuters) - Pakistan skipper Babar Azam became the seventh batsman to smash a century on Saturday, on day three of a veritable runfest in the opening test against England in Rawalpindi, but the visitors remain on course for a solid first innings lead.

After an English quartet hammered hundreds on Friday, a trio of home batters helped themselves to centuries to power Pakistan to 499-7 on day three.

Agha Salman was batting on 10 with Zahid Mahmood on one at the other end when bad light stopped play, with Pakistan still 158 behind England s massive first innings total of 657.

England batsman Joe Root told Sky Sports afterwards: "A brilliant day. That last session, all the work we put in came to fruition.

"It was attritional. We had to be creative throughout the day and we got our rewards at the end," he said.

Batting records continued to tumble on the placid pitch, however, with all four openers hitting hundreds in the first innings of a test match for the first time.

Resuming on 181 for no loss, openers Imam-ul-Haq (121) and Abdullah Shafique (114) duly brought up their hundreds before England struck with their spinners.

After 65 overs of denying England a breakthrough, the Pakistan openers, however, fell in quick succession.

Abdullah became Will Jacks  (3-132) first test victim after attempting a cut shot and instead deflecting the ball into Ollie Pope s waiting gloves.

Jack Leach removed Imam by luring the left-hander into stepping out only to find Ollie Robinson at long on.

Imam smashed 15 fours and two sixes in his third test hundred -- all three of which have come at Rawalpindi.

Azhar Ali (27) got an extra life on 20 when Crawley spilled him at leg slip but could not capitalise and fell lbw to Leach a short while later.

Babar was rock solid as usual. His England counterpart Ben Stokes tried to bounce him out on an unresponsive pitch and Babar had no problem pulling him repeatedly.

He eventually brought up his eighth test hundred and first against England with a four off Stokes, making a little prayer before resuming batting.

England claimed four wickets in the final session to maintain their upper hand.

Robinson dismissed Saud Shakeel (37) in the first over after tea and Babar was the next to go, fluffing a cut shot against Jacks. Babar s 136 was studded with 19 fours and a six.

"We have three big wickets to take in the morning, then we will try and crash some around and get up to a reasonable total," England s Root said.

Pakistan Cricket Board chairman Ramiz Raja has described the state of the pitch at Rawalpindi as "embarrassing", blaming it on the lack of test matches played there.