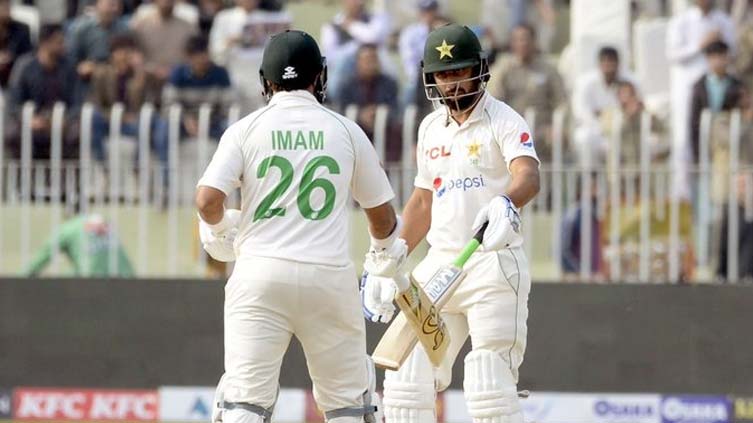 RAWALPINDI (Dunya News) - On the third day of first Test against England, Pakistan will resume their first innings at overnight score of 181 for no loss today (Saturday).

On Friday, Pakistani openers Imam-ul-Haq was not out on 90 and Abdullah Shafique was unbeaten on 89 as they played out over two sessions and guided the home team to 181-0 before bad light closed out play with 17 overs still remaining in the day.

Pakistan still trails England by 476 runs on a grass-less wicket and needs a further 277 runs to avoid the follow-on, with the wicket still unresponsive to either pace or spin.

“It’s a pretty nice wicket to bat on as you can probably tell by our score,” said Harry Brook, one of the four England century-makers. “It’s going to be tough to get 20 wickets but we’re definitely going to give it a crack. When we were batting it (the wicket) had started getting a bit low.”

Imam has already faced 148 balls and hit 13 fours and a six while Shafique hit 10 boundaries and two sixes in his 158-ball innings.

Neither batter matched the belligerent batting of England at the Pindi Cricket Stadium as they scored at an average of 3.5 an over in comparison to visitors’ scoring rate of 6.5.

Pope had to don the gloves behind the wicket after regular wicketkeeper Ben Foakes didn’t recover from a viral infection on the eve of the test match.

Imam should have been dismissed very early into the second session but Pope fumbled a faint edge in left-arm spinner Jack Leach’s first over.

On an unresponsive wicket for the bowlers, England persisted with spinners most of the time but the experienced Anderson couldn’t extract any movement with either new and old ball. Left-arm spinner Leach and off-spinner Will Jacks bowled 31 overs in between them but England couldn’t get the breakthough.

After amassing a world record 506-4 in 75 overs on the opening day when four of the five top-order England batters scored centuries, England added 151 runs at the same electrifying pace to rack up its highest total in a test innings against Pakistan.