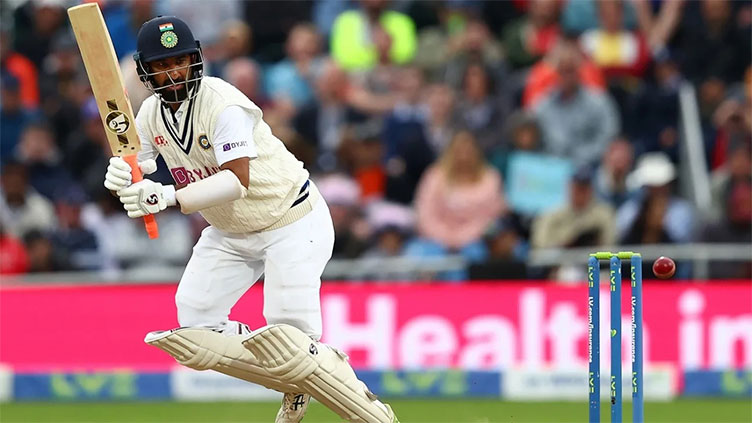 India were 125-3 in their second innings at stumps on the third day of the Test against England.

Pujara was exactly 50 not out, having reached the landmark in the last over of the day off part-time spinner Joe Root.

The opener had faced 139 balls, including seven fours, with the 34-year-old at the crease for over three-and-a-half hours.

Rishabh Pant was 30 not out, following his 146 in India s first-innings 416, having helped Pujara add precisely 50 in 13 overs.

Pujara s old-fashioned approach may be markedly different from England s newly aggressive batting style. But it could yet prove invaluable if his side are to join the India teams of 1971, 1986 and 2007 by winning a Test series in England.

"He is a warrior," said India paceman Mohammed Siraj of Pujara.

"When the team needs it he just has this attitude," added Siraj, who took 4-66 on Sunday. "When it is a tough situation then he wants to stand up and deliver."

There have been only two successful fourth-innings chases in a Test at Edgbaston during the past 30 years, with South Africa making 283-5 in 2008 and England 211-3 against New Zealand in 1999.

But with England having reached seemingly stiff targets of 277, 299 and 296 during a recent 3-0 whitewash of Test world champions New Zealand, the outcome of this match is far from guaranteed.

"Look, if we can nip a few out early tomorrow then, as Ben (Stokes) said at the toss, we ll be looking for a chase, and that s exactly what it ll be," Bairstow told the BBC.

"Absolutely (we ll chase anything), that s the mentality that we re going in with, we want to win games of cricket."

Pujara might not have been playing had regular captain Rohit Sharma (Covid-19) and fellow opener KL Rahul (groin) been fit.

He has gone more than three years without a Test hundred since posting a century against Australia -- a drought of 50 innings after he was out for 13 in the first innings at Edgbaston.

Star batsman and former India captain Virat Kohli has also endured a barren spell without a Test century since a hundred against Bangladesh at Kolkata in November 2019.

He fought hard to try and end that now 33-innings long sequence while making 20.

But he fell in bizarre fashion when wicketkeeper Sam Billings dropped a routine chance off England captain Stokes only for first slip Root to grab the rebound.

Earlier, Bairstow s third hundred in successive Tests was the cornerstone of England s 284 that left the hosts 132 runs behind on first innings.

England resumed in the dire position of 84-5, with Bairstow 12 not out.

Yet for all his blazing hitting later on, Bairstow played himself in while making 16 not out off 65 balls. He then accelerated in scoring his next 84 runs off just 54 balls to get to three figures.

The 32-year-old s fifth Test century of 2022 followed Bairstow s scores against New Zealand of 136 at Trent Bridge and 162 at Headingley.

But he fell to the persevering Mohammed Shami when an edged drive flew to first slip Kohli, with whom Bairstow had exchanged words earlier Sunday.

Stokes made a frantic 25 that ended one ball after he was dropped by Jasprit Bumrah at mid-off with the stand-in India captain holding a far more difficult chance diving to his left.

It was the latest impressive contribution to a fine all-round effort by Bumrah, with the tailender smashing Stuart Broad for 29 in what became an over worth 35 -- the most expensive in Test history.

And by then removing all of England s top three, spearhead quick Bumrah set a new record for most wickets taken by an Indian bowler in a series in England of 21.

This decider should have been played in Manchester last September only to be postponed just hours before the start because of coronavirus concerns within the India camp.