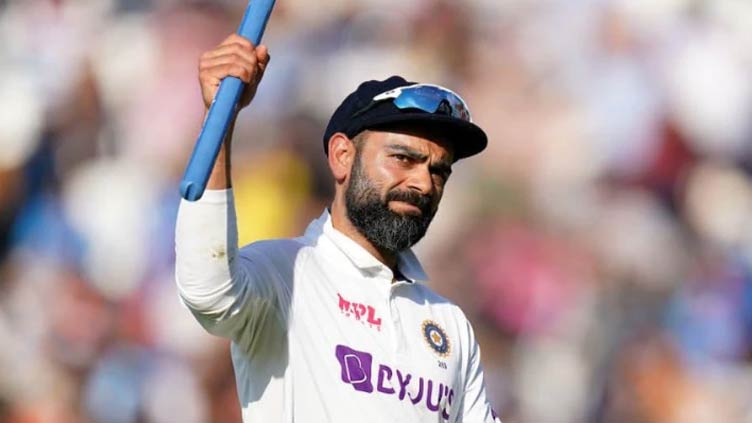 NEW DELHI (AFP) - India s Virat Kohli quit as Test captain Saturday, bringing to an end a controversy-laden seven-year stint in one of the highest-profile, highest-pressure positions in sport.

"Everything has to come to a halt at some stage and for me as Test captain of India, it s now," he posted on Twitter, a day after his side lost a three-match series to South Africa.

The 33-year-old Kohli, who stepped down as Twenty20 skipper after a debacle at the World Cup and then lost the one-day job, took over the India leadership across formats from MS Dhoni in 2017. "There have been many ups and also some downs along the journey, but never has there been a lack of effort or lack of belief," Kohli said.

"I have always believed in giving my 120 percent in everything I do, and if I can t do that, I know it s not the right thing to do. "I have absolute clarity in my heart and I cannot be dishonest to my team," he added.

India lost the final match in Cape Town by seven wickets on Friday to go down 2-1, with Kohli blaming the team s poor batting for the defeat.

Batting star Kohli took over the Test captaincy in 2014, when India were ranked a lowly seventh in the five-day format, and he took them to number one, a position they held for nearly three years.

But in a nation of more than 1.3 billion people and obsessed by cricket, the actions of the national captain are probably scrutinised more closely than anyone s except the prime minister. And critics always pointed to his failure to land a World Cup triumph in either T20 or ODI cricket.

Never afraid of speaking his mind, Kohli recently courted controversy when he said he was informed of his ODI sacking 90 minutes before the team announcement for the South Africa series and was never encouraged to stay on as T20 skipper, as claimed by the Board of Control for Cricket in India president Sourav Ganguly. "I ve done the job with absolute honesty and left nothing out there," Kohli said in his statement.

Tributes poured in for the batting star. "Many Congratulations #ViratKohli on an outstanding career as India s Test Captain," former opener Virender Sehwag tweeted. "Stats don t lie & he was not only the most successful Indian Test Captain but one of the most successful in the world. Can be very proud @imVkohli & looking forward to watch u dominate with the bat."

Kohli has also quit as captain of Indian Premier League side Royal Challengers Bangalore and many have welcomed his decision to concentrate more on his batting -- his form has dipped and has not scored a century in the past two seasons.

Kohli thanked former head coach Ravi Shastri, who stepped down after the World Cup, when a much-fancied India exited at the group stage after defeats including going down to arch-rivals Pakistan.

Last year India were also beaten by New Zealand in the first ever World Test Championship final. "I want to thank the BCCI for giving me the opportunity to lead my country for such a long period of time and more importantly to all the teammates who bought into the vision I had for the team from day one and never gave up in any situation," said Kohli. "You guys have made this journey so memorable and beautiful."

Kohli has played 99 Tests for India since his debut in 2011, scoring 7962 runs at an average of over 50. He was involved in a DRS controversy in his final Test as captain when he and some of his players in South Africa reacted angrily to an lbw decision turned down by the third umpire.

Several Indian players including Kohli were heard complaining about the decision on the stump microphone and there appeared to be suggestions the broadcaster was manipulating the technology. He remains part of the ODI team, led by KL Rahul in the absence of injured Rohit Sharma, that will play three matches in South Africa starting January 19.